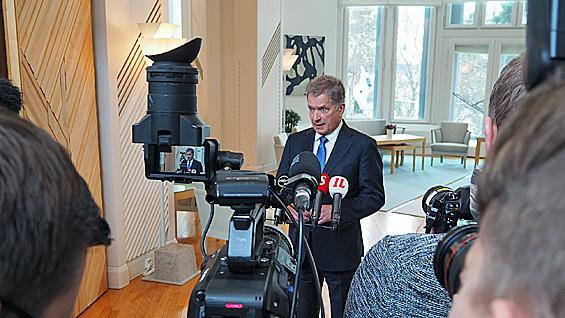 President Niinistö met media representatives in Mäntyniemi after the meeting with political party leaders. Photo: Office of the President of the Republic.

President of the Republic Sauli Niinistö invited parliamentary party chairmen to Mäntyniemi on 24 February to discuss topical foreign and security policy issues. After the meeting, the President spoke to the media about the views he had expressed. At the beginning of the press conference, the President underlined how valuable it is that in Finland we are able to discuss key issues between parties in Government and the opposition. The President addressed three topics when speaking to the media: the current migrant situation in Europe, discussions with Russia regarding the eastern border, and military exercises conducted with Nato countries.

Negotiations with Russia continue in a constructive spirit

President Niinistö commented on the migrant situation, saying that the scenario he anticipated in his speech at the opening of Parliament seems to be materialising: “The almost chaotic situation in Southern and Central Europe has resulted in each country devising individual measures to tackle the situation; it is highly questionable whether such measures are in line with international conventions. The Nato solution proposed within the EU may well be the best in terms of results, but there is likely to be a discussion on whether it is in harmony with international conventions,” said President Niinistö.

With regard to asylum seekers arriving in Finland across the eastern border, the President commented that negotiations with Russia continue in a constructive spirit: “The fact that people of more than 30 nationalities have come to us via that route has naturally attracted attention. Actually, some of these people come from countries experiencing no immediate threat of war, distress or persecution. This is the situation that we continue to discuss with the Russians.”

President Niinistö also spoke about the joint exercises with Nato or Nato countries. According to him, it should be clear that there are two types of exercise: “The less visible but more tangible type of exercise is the so-called map exercise that occurs at the level of headquarters. This defines the position of Nato partners in relation to Nato. Over the last 15 years, Finland has taken part in at least five of these so-called CMX exercises. Because their content involves foreign and security policy, the Foreign Ministry handles the preparations for such exercises.”

The exercises that recently hit the headlines do not concern security policy issues, but are intended to develop Finland’s national defence capabilities: “They are simply technical and tactical exercises. It is incorrect to conclude that they are shaping Finland’s security policy, which is not the case. As I said, CMX exercises have involved a completely different context in which we have conducted a thorough discussion of Finland’s role, which will be to secure our own territorial defence and integrity. This means that we will secure Finland’s territorial integrity as a Nato partner. This is the policy content of Finland’s exercise activity now and certainly in the days to come.”

Some exercises will be examined in more detail

Some of the planned exercises will be reviewed in greater detail in the future. At the Ministerial Committee on Foreign and Security Policy, the President held a discussion with Government representatives on the definition of the criteria for exercises involving new issues: “From now on, the Ministry of Defence will automatically evaluate any exercises that meet our new criteria. This should help to avoid this type of discussions, or should I say muddled discussions, in the future,” the President said.