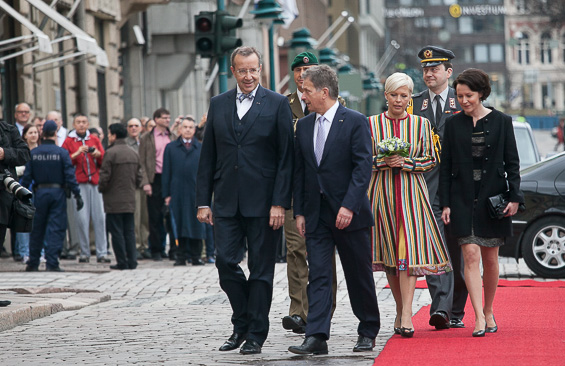 European security was the main theme during the state visit by President of the Republic of Estonia, Toomas Hendrik Ilves, on 12–14 May 2014.

During the press conference for the visit, President of the Republic of Finland Sauli Niinistö reminded his audience of the original task of the EU, maintaining the peace. “Can the EU fulfil this key task through NATO only? Or is it so that the Union itself and its Member States should do their best to maintain peace? And this is linked to defence, that is why Finland has been and will continue to be active in discussing the EU’s Common Security and Defence Policy. If we have a basic value, we should also maintain that by ourselves. I do not mean that we should exclude NATO, but excluding Europe is not the right way.”

President Niinistö believes that, due to the Ukraine crisis, Europe now faces an entirely new situation which no one could foresee. “It seems that we have taken steps back to the past. I do not mean a return to the Cold War, but we are facing what may be a long period of deep distrust between the EU and Russia.”

Although President Niinistö feels that it is difficult to predict how the situation in Ukraine will develop, it is critical that the violence be contained. This may require a stronger international presence, and Finland aims to increase its contribution to the OSCE Special Monitoring Mission. In addition, armed groups operating in Ukraine must lay down their weapons. On the other hand, Ukraine’s internal legitimacy must be reinforced, which lends importance to the forthcoming presidential elections.

In addition to international issues, the discussions between the two presidents covered matters such as Finnish-Estonian bilateral relations. President Niinistö pointed out that commerce between Finland and Estonia is growing despite the economic situation in Europe. Concrete examples include collaboration in the ICT sector and the forthcoming children’s hospital in Helsinki, which could also provide Estonian children with specialist hospital care.

Following the official talks and a lunch arranged by the City of Helsinki, the programme will continue with a seminar on economic relations between Finland and Estonia. An almost 40-member business delegation has accompanied President Ilves to Finland.  On Tuesday afternoon, President Ilves and the delegation will visit gaming and entertainment company Rovio in Espoo. In addition, President Ilves will make a speech at an event held by the Finnish National Defence Course Association. The day will end with a banquet hosted by President Niinistö and his wife at the House of the Estates.

On Wednesday 14 May, President Ilves will lay a wreath at the Hietaniemi Cemetery and visit the Finnish Parliament, where he will meet Speaker Eero Heinäluoma and Prime Minister Jyrki Katainen.  President Ilves will also visit Vuosaari Harbour and the presidential couples will spend some time together on Suomenlinna.

The presidents’ wives became acquainted at the Tove Jansson exhibition at the Ateneum on Tuesday. The special programme for Mrs Evelin Ilves includes an introduction to Finnish design and visits to a Sports Medicine Research and Education Center and to sports device manufacturer Suunto.