Home / President Niinistö during the state visit by the President of China: “We both believe that free international trade will benefit and provide prosperity for societies around the world” 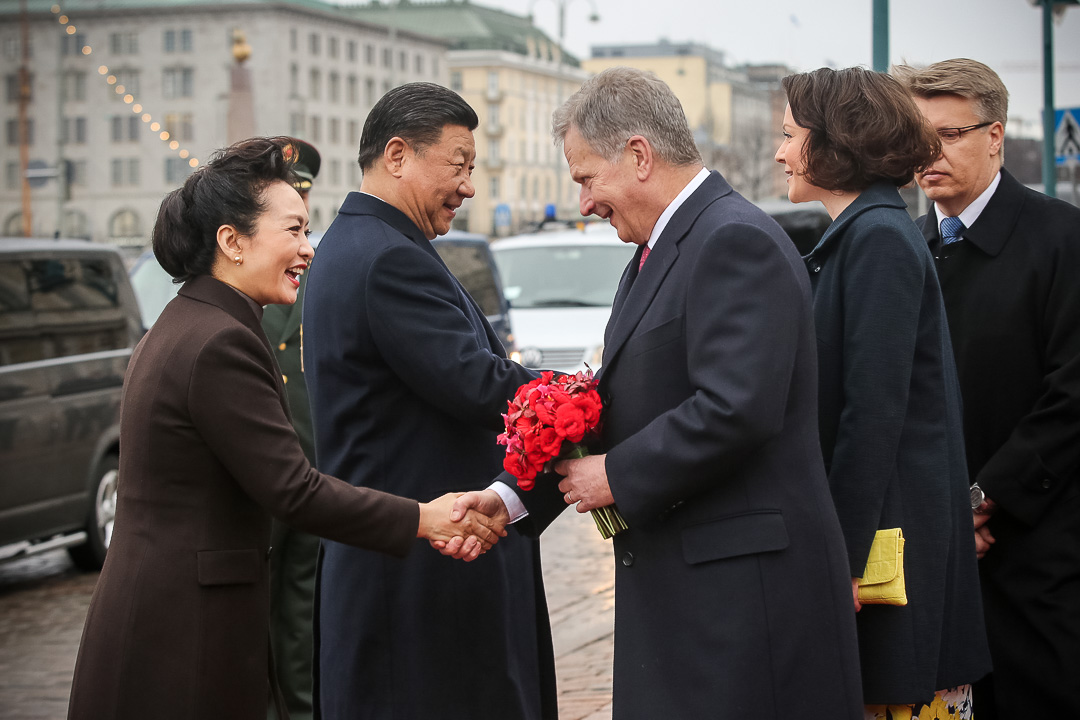 President Sauli and Mrs Jenni Haukio welcomed President of China Xi Jinping and Mrs Peng Liyuan to Finland at the Presidential Palace on 5 April, 2017. Photo: Juhani Kandell/Office of the President of the Republic of Finland

“The relations between our countries are excellent and deep. They extend to all sectors of society. This is well illustrated by our Joint Declaration, which represents an important step in our bilateral relations. Our relations will now become even closer,” commented President Niinistö after meeting with President Xi Jinping of the People’s Republic of China in Helsinki on 5 April 2017.

Joint Declaration to promote ties between the countries

The presidents discussed relations between Finland and China, and international issues, such as Russia, the USA, the EU and the situation on the Korean Peninsula. President Xi Jinping congratulated Finland on its centenary year and its development during its hundred years of independence. The Joint Declaration between Finland and China was also agreed during the meeting.

“As we state in our Declaration, we support the United Nations, its Charter and policies. We will work together to resolve global challenges. Also as a permanent member of the UN’s Security Council, China plays a key role in safeguarding global stability,” commented President Niinistö.

Both presidents stressed the close ties between their countries. President Niinistö stated that cooperation would be fostered in areas such as education, innovation, culture, energy, urbanisation, forestry, transport and the ICT sectors.

“We have long worked together on societal issues. In our Declaration, we emphasise the rule of law and the promotion of human rights. We will also increase our practical cooperation in the legal sector,” President Niinistö continued.

A strong EU is important to China

President Niinistö viewed China’s support for the EU as important. He said that a strong and effective EU is China’s goal too.

“By working together, the EU and China can achieve significant results with respect to global issues, such as combating protectionism and climate change. We both believe that free international trade will benefit and provide prosperity for societies around the world,” President Niinistö emphasised.

President Niinistö welcomed China’s Silk Road Initiative, which would deepen relations between Asia and Europe. He also emphasised cooperation on Arctic matters. Finland will begin its chairmanship of the Arctic Council in May.

Pandas as messengers of friendship

A number of cooperation documents were signed during the state visit. In the presence of Presidents Sauli Niinistö and Xi Jinping at the Presidential Palace, cooperation documents were signed on the protection of pandas, the continuation of collaboration in the legal sector, and closer ties on innovative enterprise between Finland’s Ministry of Economic Affairs and Employment, and China’s Ministry of Commerce. The signature of the agreement on the protection of pandas will enable the arrival of pandas in Finland.

“We agreed to engage in cooperation on panda research. We are making pandas into messenger of the friendship between our countries,” said President Xi Jinping.

President Niinistö thanked President Xi for the trust he had shown Finland with regard to pandas: “We know that pandas are a national treasure of China,” the President said.

President Xi is accompanied by a high-level delegation during his visit to Finland.

Video: The signing ceremony and statements of Presidents