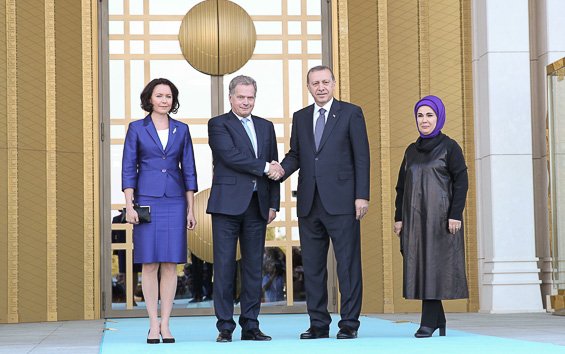 “Turkey has a major role to play in resolving the Syrian crisis,” said President of the Republic Sauli Niinistö in Ankara on 13 October. “We are concerned about the escalation of tensions. What we need now is a constructive dialogue and cooperation between all parties concerned,” said President Niinistö at a joint press conference with the President of Turkey, Recep Tayyip Erdoğan.

At their meeting, the two presidents also discussed another shared challenge: the immigration crisis stemming from the civil war in Syria. “Europe needs Turkey now more than ever,” said President Niinistö. “Turkey has undertaken a great effort and assumed great responsibility in aiding refugees. But we need to increase cooperation between Turkey and the EU in this matter; it is a challenge we must respond to together.”

“However, membership negotiations remain the cornerstone of relations between the EU and Turkey,” President Niinistö continued. “Finland has consistently been in favour of Turkey acceding to the European Union. In our discussions today, I encouraged Turkey to continue on the path of reform, taking into consideration issues of the rule of law and the freedom of expression.”

The presidents also discussed peace mediation and bilateral relations between Finland and Turkey. “Collaboration in nuclear safety is an important area. I see much potential for trade between our countries, and we could do more to leverage that potential,” said President Niinistö.

President Niinistö opened the press conference by expressing his deepest sympathy on behalf of the people of Finland to the families of those who lost their lives in the bombings in Ankara on Saturday 10 October and to the people of Turkey generally. “Finland strongly condemns any and all acts of terror,” said the President. “We wish to express our support in these difficult times. We must not let acts of terror foster a climate of fear.”

The programme continued on Wednesday, 14 October in Istanbul, where a seminar was arranged on Finnish and Turkish economic relations. President Niinistö said in his speech that both Finland and Turkey were gateways between East and West. “Trade between our countries totals some EUR 1.1 billion at the moment. Our joint objective should be to double it in the next few years. “

According to President Niinistö, Finland has a lot to offer to Turkey in at least the energy, cleantech and innovation sectors. “Sustainable development and effective use of natural resources is taken for granted in Finland,” the President said. This is where Finland can offer know-how to Turkey, which aims to increase the use of renewable energy, for example.

Nuclear safety and nuclear waste management know-how are current areas of cooperation, as  Turkey is building its first nuclear power plant. A memorandum of understanding was signed during the visit, concerning closer cooperation between the nuclear safety authorities of Finland and Turkey. In addition, Finnish and Turkish companies promoting exports at a business seminar signed an agreement on deeper cooperation.

The finance seminar was also attended by Olli Rehn, Minister of Economic Affairs, and a delegation of business leaders.