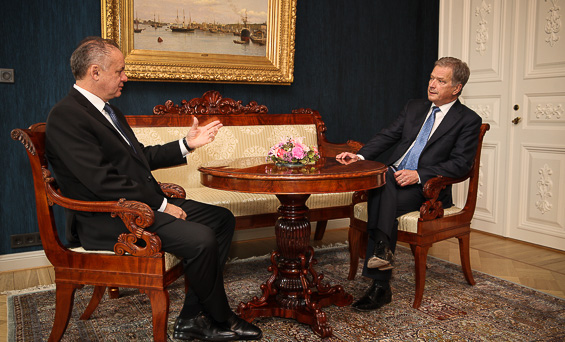 “Finno-Slovakian relations are at an excellent level,” said President of the Republic Sauli Niinistö at a press conference, held at the Presidential Palace on 21 October, for a visit by Slovak President Andrej Kiska. President Kiska is paying an official visit to Finland on 20 to 22 October, during which he is learning about Finnish education, research and innovation among other issues.

The Finnish education system and start-up firms are of interest in Slovakia. On Thursday, President Kiska will open Slovakia’s first foreign innovation centre, in Espoo.

Both Presidents agreed that Finland and Slovakia have a great deal in common – more than just a passion for ice hockey. “As countries we are around the same size and both are members of the European Union. We collaborate a great deal over trade,” said President Niinistö. Cleantech is opening up new opportunities in trade relations.

Immigration to the European Union a major challenge

The presidents discussed the geopolitical situation which, according to President Niinistö, is reflected in the mass immigration into Europe. “We certainly agree, of course, that the best way forward would be to help the refugees as close as possible to their places of origin. It looks as though the European Union is moving in the same direction. Hopefully, we will succeed in this,” added President Niinistö.

“We face a major challenge in the EU since, depending on the estimates, a minimum of over half a million refugees have arrived and we in Europe have to try and process them,” the President commented. “This has also impacted on Finland. In relative terms, Finland is probably receiving the third highest number of refugees at the moment.”

The discussion also focused on global power politics, with President Niinistö characterising the Syrian situation as being in a key position. “I hope a better way forward can now be found, which will reflect on the situation in Ukraine and relax the tense atmosphere here in Northern Europe.”