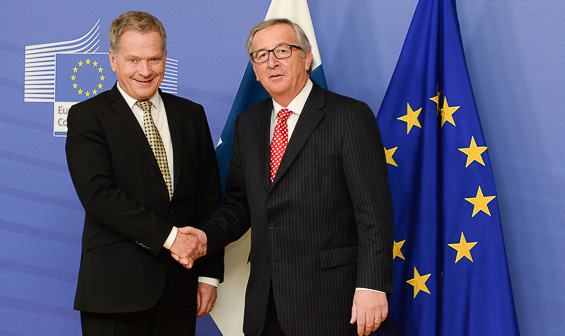 Topics discussed included the situation in Ukraine and developments in Russia, and the development of the EU’s common security and defence policy. President Niinistö raised the issue of hybrid warfare as a concrete development target in common defence and the European security community. He also said that European citizens would no doubt appreciate the issue of security being raised as a European Union priority.

The situation in Ukraine is fragile

“It is very obvious that the Ukrainian crisis cannot be resolved very rapidly”, said the President. There have been steps forward and backward during the crisis. “The situation is very fragile. It is important that we are trying to do our best to gain peace in Ukraine. That’s the most important thing now. That is why the Minsk process and continuing it is the key issue.”

“In Finland, we are worried about the EU-Russia relationship, which has been affected very badly by Russia’s aggressiveness in Ukraine. Peace in Ukraine is the first step.  We also have to think how to improve relations with our big neighbour.”

During the visit to Brussels, President Niinistö also met Ilkka Salmi, Director of the EU Intelligence Analysis Centre, and Georgij Alafuzoff, Director of the Intelligence Directorate of the European Union Military Staff. On Wednesday evening, the President attended a reception hosted by Finland’s Permanent Representation to the European Union, where he met Finns working in EU institutions.

This was President Niinistö’s first visit to Brussels during his term of office.