Home / President Niinistö in his inauguration speech: I will devote myself to this task 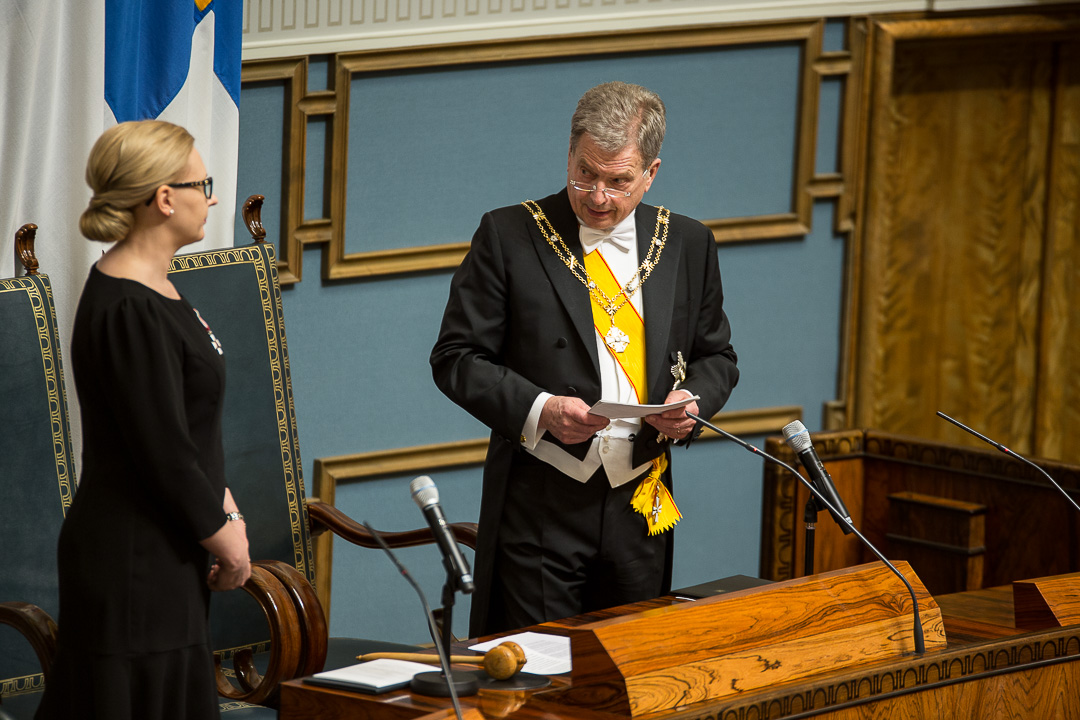 In his inauguration speech, President Niinistö said that it is a great honour to be elected President and that the office entails great responsibility. “I take this responsibility humbly, but with determination. I will devote myself to this task, and this is the biggest promise one can make.”

The UN needs all our support

The main duty of the President of the Republic is to lead Finland’s foreign policy in cooperation with the Government. In his inauguration speech, President Niinistö identified future challenges and solutions in this conflict-ridden world. The President said that he sees two possible ways to improve the situation. The first he calls the way of international order: “[T]he positions of both the UN and the EU must be strengthened. — The UN will have to regain its position as the forum of peoples and the forum for peace.”

President Niinistö said that Secretary-General Guterres will need all our support in his reform process and also that the EU requires an overhaul. “The EU is an organisation with plenty of desire for peace, but it continues to punch below its weight. We need a Union which is also a security community with a unified voice that is heard. Finland has an active role in this, we are not a mere observer.”

President Niinistö calls the second the way of direct contacts. “[D]ialogue between the west and the east is essential. And west means not only the United States and NATO, but also the EU, and east means not only Russia, but also China. Maintaining a dialogue is the first step towards building peace.” 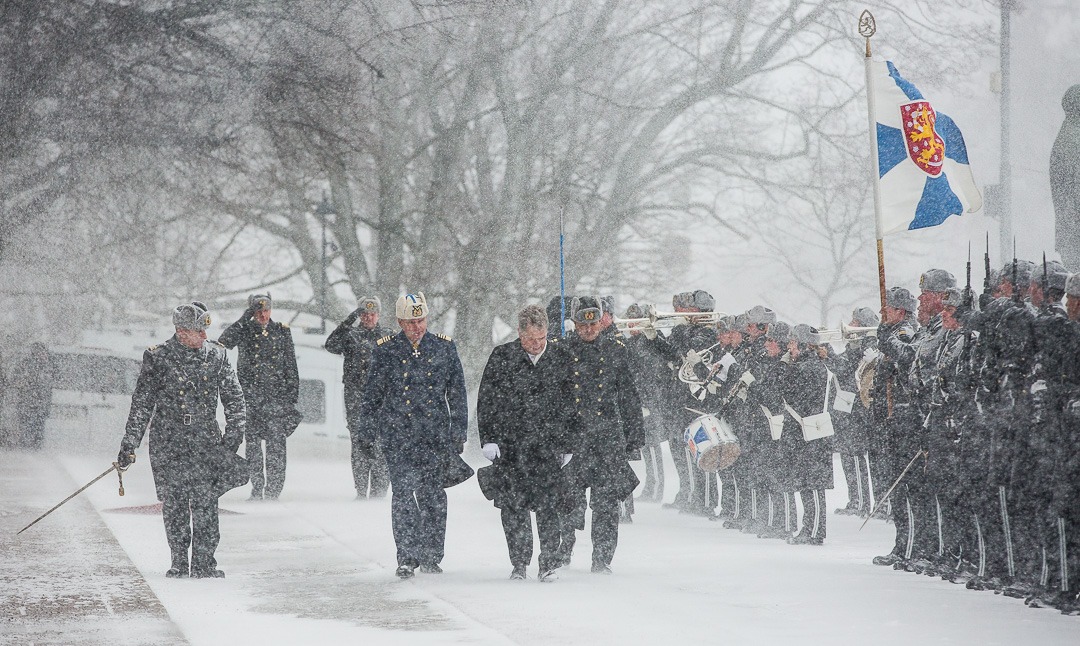 President Niinistö inspects the guard of honour from Mannerheimintie in front of the Parliament Building. Photo: Juhani Kandell/Office of the President of the Republic of Finland

The President reminded those present that humankind faces huge challenges , such as poverty, climate change and gender inequality. Finland aims to be at the tables where the future is decided. President Niinistö emphasised that mitigating climate change will be the most important issue in the years ahead: “It is a fact that humanity cannot afford to lose our planet. “

In his speech, President Niinistö also paid attention to the young and loneliness – we can all take action. “Many good things are happening in Finland right now, but not to everyone. We should particularly take notice of the young. We cannot afford to lose a single future talent”, the President said. “We also have to work actively against loneliness. Loneliness is a serious national disease of our often serious nation. — We can all take action: a small gesture can make a big difference. No gesture is too small. Let us take action and encourage each other. Let us be compassionate, that is what loving your neighbour means.”

He also answered a question by Speaker of Parliament Maria Lohela: “I answer with two different kind of senses, the sense of justice and the sense of responsibility and the trust that is built on them.”

At the Presidential Palace: greeting diplomatic corps and representatives of state 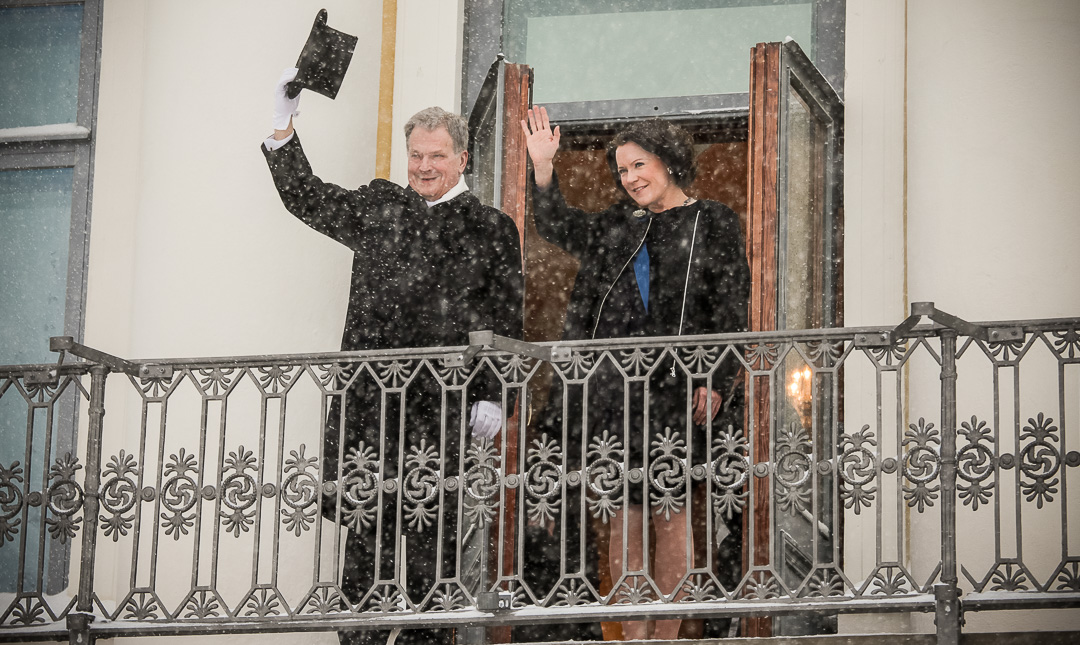 Greetings from the Palace balcony. A light snowstorm blanketed Helsinki during the inauguration day. Photo: Matti Porre/Office of the President of the Republic of Finland

From Parliament, President Niinistö and Mrs Haukio proceeded to the Presidential Palace, where they greeted the public from the balcony. In the Hall of Mirrors, the Dean of the Diplomatic Corps, the Ambassador of Nicaragua, Ricardo Alvarado, greeted the President, who then responded. Before transferring to the Hall of State, the President shook hands with the members of the diplomatic corps. 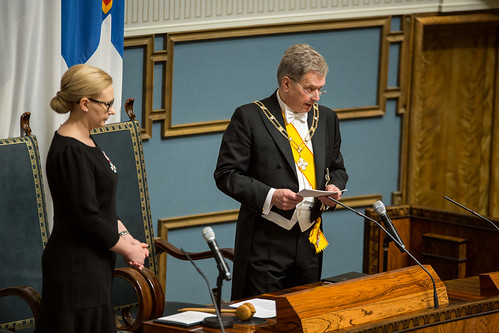