Home / President Niinistö in his New Year’s Speech: Finland’s foreign policy safeguards the liberty, security and wellbeing of all Finns 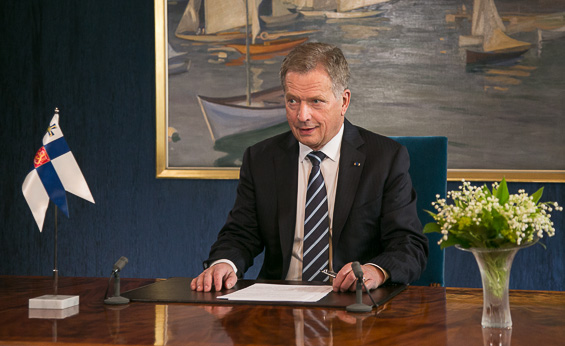 President of the Republic Sauli Niinistö opened his traditional New Year’s Speech  by noting that the past year has left us with three major issues: security, economy and the environment. We have discovered that Europe is not the haven of peace that we imagined it to be: “The Ukrainian conflict and Russia’s actions in it proved otherwise. The Ukrainian catastrophy, which has claimed thousands of lives to date, has taken us back in time – to the questions of war and peace.” The President noted that Finland is one of the few countries in Europe to have continued to consider military conflict a potential threat and to have maintained an appropriate defence capacity. The President explained that Finland pursues an active policy of stability intended to ensure stability in northern Europe and contribute to decreasing broader confrontation.

Finland has followed a consistent policy regarding events in the Ukraine from the very first. Finland condemns any illegal occupations, illegal use of force or attempts to limit the sovereignty of independent nations: “We condemned Russia’s illegal annexation of Crimea as soon as it happened and then condemned Russia’s actions in eastern Ukraine. We have done this in the EU context but have also made this clear in our direct contacts with Russia.” The President added that Russia is well aware that Finland is and will remain part of the West.

The President described the pillars of Finland’s national security: our Western partnership, evolving bilateral defence cooperation with Sweden, and NATO partnership taken to a new level. The President also said that membership of the EU is an important security solution for Finland, even if it is not a defence solution. The President described peace as a fundamental value of the EU: “It is inconceivable that the EU would simply look on if the territorial integrity of one of its Member States were violated. If that were to happen, the Union built on values of peace and liberty would be standing on feet of clay.” Concerning potential future NATO membership, the President said that it goes without saying that we can always apply for membership, if we wish to do so.

Everyone must give up something

In addressing the Finnish economy, the President stressed that the common good is our most important natural resource. Even today, with the foundation of our economy eroding, we must safeguard the integrity of Finnish society and leave no one behind. For decision-makers, the President’s message was that the time for action is now. He said he believed that the people will reward the decision-makers who undertake the reforms we so badly need. He also expressed a desire for making a virtue out of necessity: “We are very concerned about our price competitiveness and the state of central government finances. Many people are firmly of the opinion that someone must give up something – preferably someone else than the speakers themselves. To make a real difference, someone would have to say: we are prepared to give up this important benefit – what benefit will you give up?” The President encouraged decision-makers to be courageous even when speaking to their supporters.

Time for action against climate change too

The President singled out climate change among the challenges facing us in 2015. He said that the forthcoming climate conference in Paris will be a tough challenge for the international community and that it is not certain whether a common solution can be found to a problem that affects each and every one of us. Niinistö notes that efforts to combat climate change weaken if there’s an economic downturn: “Our national debts and our common carbon debt are put in the balance, even though both debts eat away at our future.” However, the President also noted that Finland has recognised opportunities in climate change for business development.

Together we are a force to be reckoned with

Concluding his speech, the President referred to the strength and stability of Finnish society. He pointed to Hannes Hynönen, the centenarian war veteran who became a national celebrity on Independence Day this year, describing him as an expert on life: “My understanding of what he had to say is that to achieve a good life you must know yourself. You must measure your expectations of other people against what you do yourself. You must remember the good but be aware of the bad. And you must see that none of us is that much more special than the other but that together we are a force to be reckoned with.” The President of the Republic ended his speech with the customary wishes for a Happy New Year and a blessing.