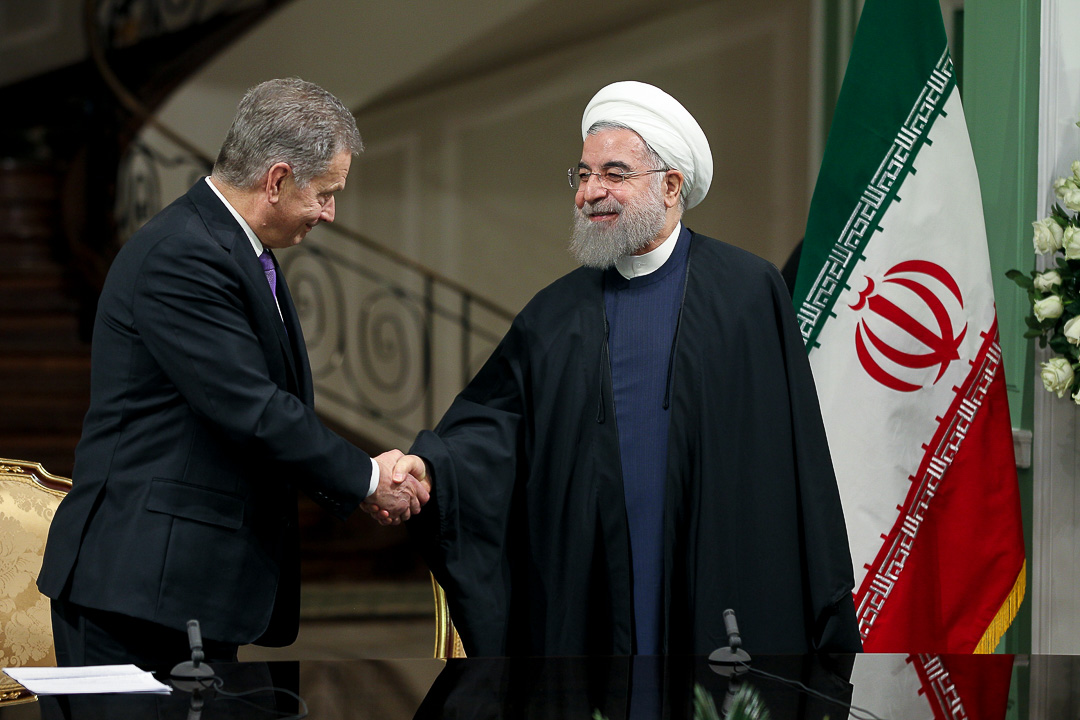 President Sauli Niinistö ja President of Iran Hassan Rouhani shook hands in Teheran on 26 October. Photo: Juhani Kandell / The Office of the President of the Republic of Finland

During his official visit to Tehran on 26 October, President of the Republic Sauli Niinistö met President Hassan Rouhani of the Islamic Republic of Iran. The Presidents discussed relations between Finland and Iran, and between Iran and the EU, and the situation in the Middle East and the Persian Gulf.

In the post-meeting press conference, President Niinistö thanked his hosts for the opportunity to visit Iran and pointed out that the two countries had a long history of cooperation.

“Iran was one of the first countries to recognise Finland’s independence, and now our countries will further deepen their cooperation,” President Niinistö said, referring to the Joint Comprehensive Plan of Action agreed in July 2015. Sanctions related to Iran’s nuclear programme were lifted in January 2016 and Iran was readmitted to international trade circles.

“This agreement represents a significant milestone, and I would like to congratulate President Rouhani for his contribution to achieving it,” President Niinistö said.

Following the agreement, Finland and Iran can now enter into closer economic cooperation. Four memoranda of understanding were signed at the meeting between President Niinistö and President Rouhani.

These memoranda of understanding will facilitate trade between the two countries. The signed memoranda cover the energy sector, natural resources and forest management, the ICT sector, and investments and export financing. Kai Mykkänen, Minister for Foreign Trade and Development, signed the memoranda as Finland’s representative, except for the memorandum on investments, which was signed by Finnvera’s Executive Vice President Jussi Haarasilta.

Situation in the Middle East under discussion

Addressing Finnish press representatives, the President highlighted the importance of Iran to regional development. “Iran plays a major role with respect to the Middle East and its problems in general, particularly regarding Syria. As we have seen, the crisis is not confined to Aleppo, or even Syria, but Yemen too is involved, while battles have been fought in Iraq – this is warfare on a large scale.”

The recent movements of refugees and migrants were also discussed – particularly Iran bearing its share of responsibility for receiving refugees. There are almost three million Afghan refugees in Iran.

“We agree that people should be helped in their countries of origin, to prevent the need to flee,” said President Niinistö.

President Niinistö stated that economic cooperation can provide one way of promoting peace in the Middle East and solving the refugee issue.

The President discussed human rights in Iran, with President Rouhani among others. President Niinistö emphasised the importance of cooperation with respect to human rights. He informed Finnish media representatives that the discussions had proceeded in a positive spirit.

“Here, we have reflected our general line by highlighting respect for people and human rights. We engaged in extensive discussions with President Rouhani and it looks as though Iran will continue talks with the EU. The death penalty will be raised in that dialogue, as it was here today. We also discussed media freedoms. That is important,” said President Niinistö.

Meetings with all political leaders formed part of the visit

The situation in the Middle East, and the current crises and terrorism, were also prominently discussed at the meetings of President Niinistö. With respect to economic issues, the talks covered matters such as problems with money transfers between Iranian and foreign banks.

The President has been accompanied on the visit by a business delegation, which includes representatives of the cleantech, bioeconomy, information technology and health technology sectors. On the first day of the official visit, Tuesday 25 October, a seminar was organised on business cooperation between Iran and Finland.