Home / President Niinistö in Iran: Many opportunities in cooperation between Finland and Iran 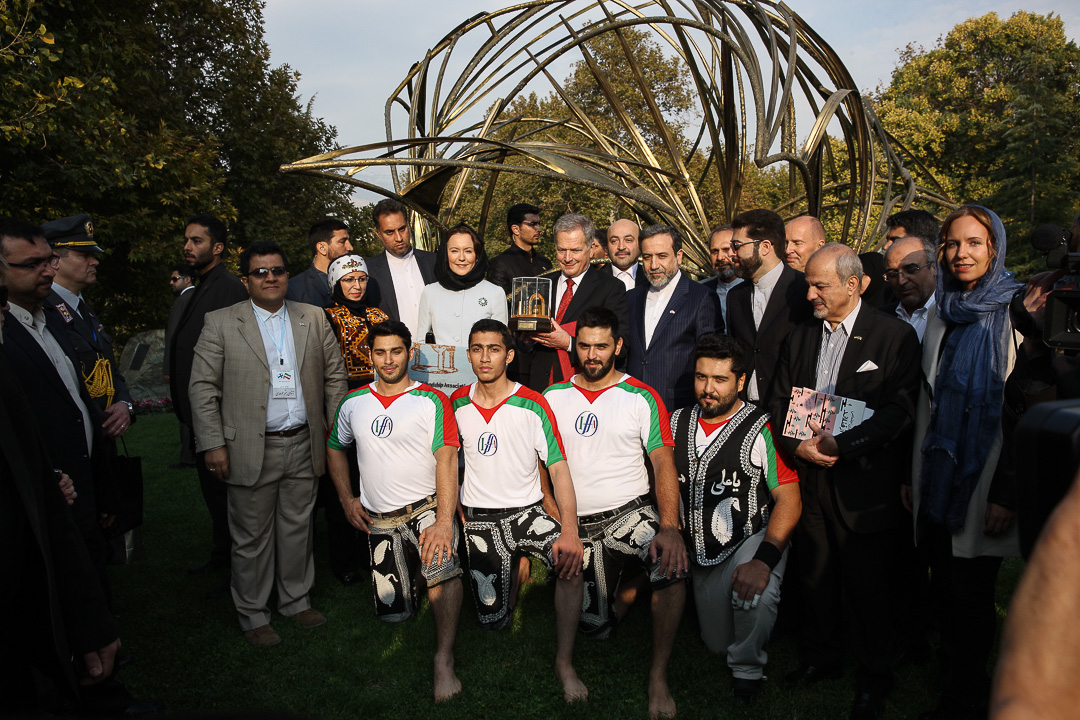 On Tuesday, President Sauli Niinistö and Mrs Jenni Haukio visited the Mellat Park, which is home to the Palm Grove monument by Finnish sculptor Eila Hiltunen. The presidential couple was introduced to local culture, music, carpet weaving, and the traditional sport of varzesh-e bastani. Photo: Juhani Kandell/The Office of the President of the Republic of Finland

“During my visit, I will discuss important international political issues with President Rouhani, such as the situation in Syria and Iran’s role in helping to bring stability and peace to the Middle East. However, our seminar today is all about business,” said President of the Republic Sauli Niinistö on 25 October, upon opening a seminar in Tehran on business cooperation between Finland and Iran.

“The Joint Comprehensive Plan of Action completed in July 2015 was an important milestone, which opened up new opportunities in our bilateral relations and business cooperation. I am convinced that this deal will promote nuclear disarmament and offer more opportunities in international trade for Iranian companies,” continued President Niinistö.

The seminar formed part of the two-day official visit to Iran by President of the Republic Sauli Niinistö and Mrs Jenni Haukio. In his speech, the President referred to the high expertise of the Finnish companies visiting Iran with him, particularly in terms of innovation and technology, and mentioned that Iranians would also benefit from this. Kai Mykkänen, the Minister for Foreign Trade and Development, is also in Iran with the President.

In his speech at the business seminar, President Niinistö emphasised Iran’s importance to Finland as a trading partner. He believes that Finland should strengthen its cooperation with Iran.

“Some 30 years ago, Iran – together with Japan – was one of our main trading partners in Asia. The potential clearly exists to regain that level of cooperation. Iran is rich in natural resources. You have a highly skilled labour force, including hundreds of thousands of well-educated engineers and businessmen who are an invaluable asset in international trade,” said President Niinistö.

President Niinistö pointed out that, in many areas, Finland could again be an attractive partner for Iran.

“Our business delegation covers sectors such as environmentally clean technologies, which is also known as cleantech, energy efficiency, the bioeconomy, the Finnish wood and paper industry, ICT and health technology. The common denominator between these companies is their commitment and aspiration to support Iranian business in its return to the global market and integration with the world economy,” said President Niinistö.

President Niinistö also emphasised that problems affecting trade will be solved. A working group acting between the central and private banks of Finland and Iran has been established to solve problems related to banking and money transfers.

In the Mellat Park the presidential couple was introduced to local culture, music, carpet weaving, and the traditional sport of varzesh-e bastani. A Finnish-Iranian 3-year-old, Sam Runola, presented them with a drawing of his own.

On Tuesday 25 October, the President’s spouse Jenni Haukio visited locations such as an international girls’ school, the Soodeh International School. The school is participating in the Treelympics campaign, which promotes the planting of trees; the Finnish virtual school for sustainable development, ENO, is behind the campaign. Tree planting formed part of the visit to the school.

On Wednesday 26 October, Mrs Haukio met with Mrs Rouhani, UNESCO and UNICEF representatives, and Iranian writers. Issues such as the human rights situation in Iran were discussed at these meetings.

On Wednesday 26 October, President Niinistö will meet President Hassan Rouhani of Iran and other political figures such as Speaker of the Parliament of Iran Ali Larijani and Minister of Foreign Affairs Mohammad Javad Zarifi.