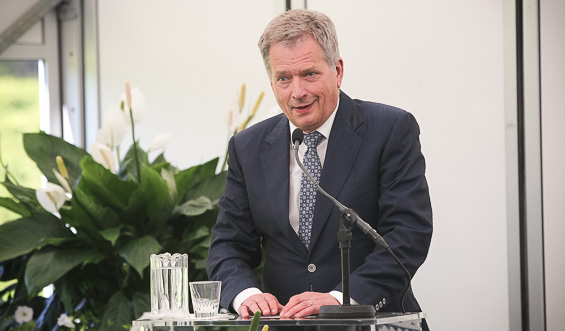 President Niinistö expressed his warm thanks to all the speakers.

“What does Finland need in order to overcome its current challenges? Commitment. The stronger the commitment of individual Finns to their undertakings, the better we will fare as a nation,” said President Sauli Niinistö as he closed the third Kultaranta Talks. Commitment also means a commitment to the community, “whatever way suits one best” said the President.

In the concluding session of the talks, President Niinistö expressed his warm thanks to all the speakers. He also said that he was surprised by the comments about cross-pressures during the international talks that morning. “I considered the discussions to have a positive outcome. I expected the discussion to be more confrontational in nature.” President Niinistö believes that the talks have prepared him well for the talks in Moscow on the following day.

As regards the economic discussion, he pointed out that the situation today is completely different from the days of the Finnish markka, when devaluation and floating were possible. The success of Nokia also boosted the recovery of the Finnish economy. Nevertheless, the situation was much grimmer than today, considering that some one third of national budget expenditure was borrowed. “The structure of the previous recession was completely different.”

President Niinistö assessed the situation saying that creative destruction creates new things, and has already done so. He says that he has observed the creation of several government programmes in Finland, but the latest one definitely stood out. Commitment is emerging.

The talks started under a cloudy sky on Sunday while Monday was a much clearer day. “The sun will shine on Finland again. As it will on us today,” President Niinistö said during his concluding remarks. 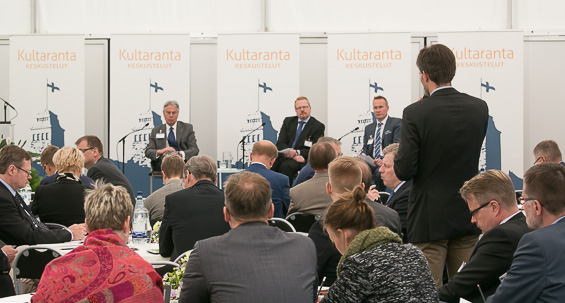 Moderators ambassador René Nyberg (on the left), Director of the Situation Centre of the European Union Ilkka Salmi and Director of the Centre for Parliamentary Studies Markku Jokisipilä presented the conclusions of the working groups, Member of Parliament Kai Mykkänen (on the right) is presenting a question.

After the morning sessions, the participants in the Kultaranta Talks continued discussions in smaller working groups. They focused on the following topics: the outlook for Russian development, intelligence, terrorism and security, and the West and the state of democracy. The group moderators summarised the discussions in the concluding session.

Ambassador René Nyberg moderated the group discussion on the outlook for Russian development. He believes that one of the strengths of the new Russia is that the economists influencing its foreign policy are competent, and the Central Bank of Russia has taken rational actions. The price of oil is always an important consideration for Russian development.

We must be able to adopt a multifaceted approach when considering Russia and its development. According to Nyberg, Russia is a permanent dilemma to which Finland has no correct answer. “It would be an ill-fated decision to turn our back on Russia,” Nyberg said. We should continue cooperation where possible, develop connections and increase competence.

Russia’s “nuclear sabre-rattling” was considered to be unprecedented. Russia considers itself the other leading nuclear country in the world, and this message was intended for Washington. Nyberg considers it very troubling that the USA and Russia find it hard to maintain a dialogue today, while they kept in close communication during the Cold War. It is of vital importance that Moscow and Washington discuss nuclear weapons together.

During the discussion, it was emphasised that there are many reasonable actions that can be taken outside the sanctions, and Finland also has some opportunities there. It is commendable that the EU has taken a common approach to sanctions, but they only apply to some sections of the economy.

René Nyberg also pointed out that “no individual factor has improved the image of Finland in Russia as much as tourism.” The good image of Finland has also weakened the impact of Russian propaganda.

Intelligence can be discussed openly

Ilkka Salmi, Director of the Situation Centre of the European Union, moderated the discussion on intelligence, terrorism and security and stated that the main conclusion was that intelligence can be discussed openly. A shift has occurred in the international security environment, and Finland must be able to respond to new threats.
International intelligence co-operation is important. Salmi pointed out that co-operation requires national activity, which can be of use when exchanging information.    “We must be able to analyse the nature of potential threats and talk about them in simple terms,” he said.

Foreign ownership of land in Finland also emerged during the discussion. Salmi said that the land register in Finland is quite comprehensive, enabling us to assess the potential risks in this area. It was stated that Finland needs investment, and it would be short-sighted to consider all foreign landowners as a potential risk.

The group also discussed the revision of legislation on intelligence, and potential problems related to privacy. Ilkka Salmi said that Finland does not plan to go beyond the legislation in force in other Nordic countries. When considering any legislative revisions, society will embark on comprehensive discussion on what should be emphasised.

President Niinistö visited the working groups, commenting on their discussions. He sees peace as the most important consideration for individuals. “Without peace, there is no respect for privacy.”

During the discussion about the Russian influence on information, Ilkka Salmi stated that observation is not enough; we must also be capable of analysis. Improved media literacy is perhaps the best answer to information influence. In an open society, it is difficult to promote misleading information. René Nyberg said that Finland has taken a moral stand against publishing propaganda. “However, it is perfectly acceptable to decode and deny false information.”

Democracy is not disappearing

Moderator Markku Jokisipilä, Director of the Centre for Parliamentary Studies, reported on the discussions on the West and the state of democracy. Overall, the working group concluded that, while democracy has not gained more ground in the world in the past few years, there is no reason to panic. We must be self-assured and should not doubt that democracy will emerge a winner.

The appeal of democracy is not a given. According to Jokisipilä, the “export” of democracy requires an environment in the emerging democracy that lets it take root. This is not possible without an initial framework of a state based on justice and integrity and free elections.

However, the danger comes from within: “The principal threat to democracy in the West is the inability to make decisions,” Jokisipilä summarised the group’s discussion.    We should look outside the Western democracies and consider whether we could learn something from other states.

The group also emphasised the importance of ownership: citizens should not consider themselves to be unsatisfied clients in the society, but owners. We must be able to ensure that civil society continues to function. We should remember to take pride in the excellent performance of the Finnish democracy, also during the more challenging times.