Home / President Niinistö in Munich: Is worse still to come, or is something better and constructive in store? 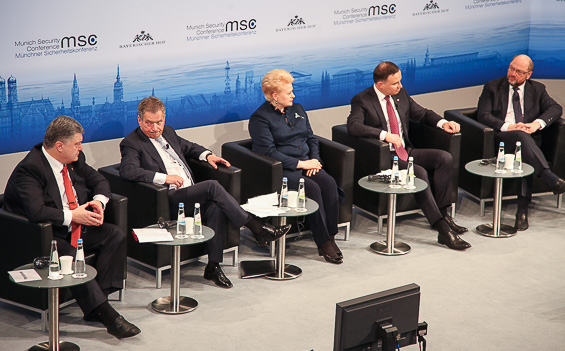 At the beginning of 2014, nobody in Europe could have anticipated the refugee crises, the situation in Ukraine or the Russian intervention in Syria, said President of the Republic Sauli Niinistö at the Munich Security Conference on Saturday, 13 February. At a presidential debate, President Niinistö was asked what keeps him awake at night. “We don’t know at the moment, what is to come. That could keep us awake during the night time, but I prefer to dream. Could anything worse still be about to happen? Maybe something better, something constructive, will come up this year?”

President Niinistö stressed that Europe and Russia must work hard towards “agreeing to disagree”. “In other words, we need to find the lowest common denominator, so to speak, from which we can start making progress. This is possible – we saw it in Iran’s nuclear programme and a couple of days ago in the negotiations on the Syrian war. We need to try to find something constructive to start with.”

Russia has been involved in all of the unexpected developments of the last few years, President Niinistö said. “Actually, they are involved in everything, from south in Syria up to the Arctic area, and we Europeans shouldn’t forget that – Russia is involved.”

The greatest threat to European values comes from inside

“I think that the danger to European values is coming from inside us – inside Europeans and the European Union,” President Niinistö said at the debate. Perhaps migration maybe has triggered it, but according to President Niinistö, incomers do not pose a threat to our values. “But our reactions to that might be.”

The means being used to solve the problem are not in accordance with international agreements, President Niinistö said. The breach of mutually agreed rules is becoming routine and little remains of the Schengen and Dublin agreements. “If we start thinking widely that, well, we’ll forget all about our agreements, then our values are really in danger. This is what I see as the major threat at the moment.” According to President Niinistö, the greatest paradox is that we cannot necessarily achieve the best results by meticulously following all of our agreements.

The themes of this year’s Munich Security Conference included the Syrian war, terrorism, the refugee crisis and the European security order. President Niinistö attended the conference on 12–14 February.

Arranged since 1963, the Munich Security Conference is an independent forum dedicated to promoting peaceful conflict resolution and international cooperation and dialogue in dealing with today’s and future security challenges. Over 400 foreign and security policy opinion-makers will attend the conference, including around 20 heads of state or government and 60 ministers.

During the conference, President Niinistö had bilateral meetings with foreign representatives such as the Russian Prime Minister Dmitri Medvedev, Senator John McCain, Chairman of the Senate Armed Services Committee of the U.S., and Martin Schulz, President of the European Parliament.

Wolfgang Ischinger, the Chairman of the Munich Security Conference, attended the 2015 Kultaranta talks and was one of the main speakers at the Foreign and Security Policy debates hosted at the time by President Niinistö. 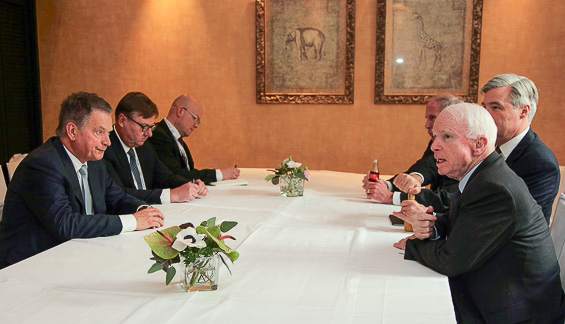 President Niinistö met Senator John McCain, Chairman of the Senate Armed Services Committee of the U.S., in Munich on 13 February. Copyright © Office of the President of the Republic 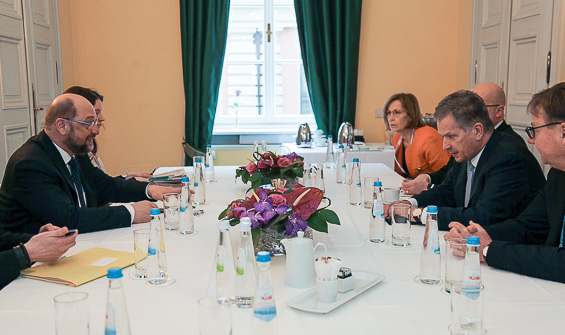 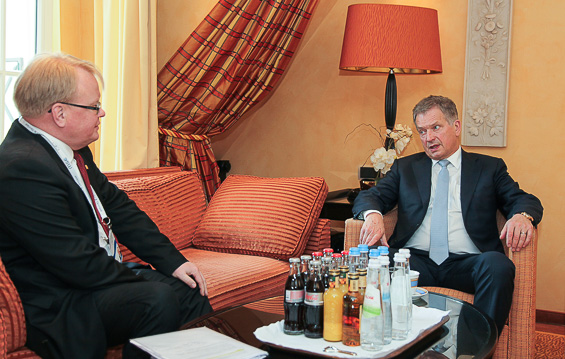 Sweden’s Minster for Defence, Peter Hultqvist, and President Sauli Niinistö in Munich on 13 February. Copyright © Office of the President of the Republic