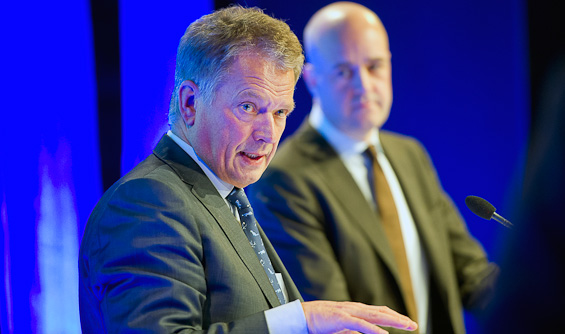 According to President of the Republic Sauli Niinistö, Finland and Sweden should consider further strengthening of defence cooperation. President Niinistö spoke at the Rikskonferens Seminar in Sälen on Sunday, 12 January.

Nordic Defence Cooperation (NORDEFCO) has made rapid ground, said the President. Similar defence solutions between Finland and Sweden leave room for the development of bilateral defence cooperation. Also hard economic realities will continue to loom large in the future. “We need to be open-minded about whether it would be more rational to act alone or together. So far, the results have been good, whether for cooperation over naval and air force training and exercises, or in actions taken to improve situational awareness”, President Niinistö said.

In future, the President said, a range of possibilities lie in closer cooperation, for example, on defence materiel and capabilities. “A major issue relates to how we can better coordinate our defence materiel purchases in either country. Closer cooperation would require that Sweden and Finland take account of one another at the earliest possible stage.”

In his speech the President also emphasised that Finland and Sweden have a joint interest in developing the EU security policy and with NATO partnership. Also, global challenges such as population growth and climate change, should Finland and Sweden consider together. “Finland and Sweden may feel somewhat distant from these issues: slightly on the margins and therefore safe. But this is an illusion. Before long, the pressure will grow on precisely those regions which are viewed as having shouldered less of the burden than others. We must give thought to these major questions together”, the President said.

President Niinistö also dealt with the developments in Russia. According to the President, in the aftermath of the Cold War it was believed that Russia would return to somewhere it had never been – Western democracy. The realisation that this journey is more winding and longer than thought, if not unending, has been greeted with sore disappointment in some quarters.

However, President Niinistö said, Russia has partially succeeded in achieving these aims: There has been a substantial rise in the living standards of its people and Russia has also strengthened its role internationally. Syria is an illustration of this. Russia is modernising its armed forces, and we must pay close attention to this transformation, while maintaining a broad perspective.

“Both the country’s domestic policy and its actions abroad have raised concerns and some justified criticism in Europe. A focus on conservative values in Russia – and perhaps movement in the opposite direction in the West – has begun to open up a clearer mental gulf between the two regions. This has been exacerbated by the nature of Russia’s foreign policy. Concerns about this are justified”, President Niinistö said.

“However, the future remains open. Russia too faces strong pressure to change and a major need for reform. For Russia, Europe remains the key partner, and perhaps the one with the most potential. However, we cannot regard the current state of cooperation as satisfactory. We need to return to a path with Russia along which mutual security and trust are built. In this regard, it would be important to take concrete steps, even small ones. Northern Europe has the structures for achieving this: the Council of Baltic Sea States (the CBSS), the Northern Dimension, Barents Cooperation and Arctic Cooperation. “

Held annually in the Sälen winter resort, the three-day Rikskonferens seminar brings together some 300 political decision-makers, officials and representatives of the business world and NGOs to discuss security and defence policy and the safety of society at large. The seminar is arranged by the Folk och Försvar (Society and defence) organisation.