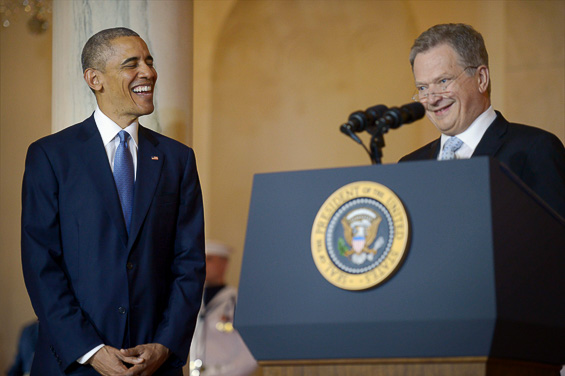 Lehtikuva/Office of the President of the Republic of Finland

President of the Republic Sauli Niinistö and other Nordic leaders made an official visit to the United States. The visit began with a reception ceremony held at the White House on the morning of Friday 13 May. President Niinistö spoke after a welcome speech given by US President Barack Obama.

President Niinistö stated that the Nordic countries and the United States are united by issues such as gender equality, equal opportunities, human rights, democracy, the rule of law and respect for international law.

In his speech, he thanked US for the leadership in combatting the climate change, drawing attention to Arctic issues, as well as multilateral cooperation, which is of vital importance to the Nordic countries.

President Niinistö also referred to the increasingly tense security situation in Northern Europe: “Times are turbulent in many respects.  Security threats abound.  The situation has become more tense even in the Baltic Sea region and Northern Europe – our neck of the woods. Strengthening security and stability there is called for, and this includes appropriate dialogue with Russia to enhance transparency and reduce risk.”

President Niinistö stated that the Nordic countries are security providers within their own region, as well as in Europe and globally. ”We shoulder our responsibilities. We seek solutions instead of problems. We are willing and able to continue to cooperate with you in promoting security and stability. We value highly the US commitment to Europe and to our security.”

According to President Niinistö, the Nordics are together a superpower – not militarily, but when it comes to innovation, education, competitiveness, sustainable development and clean technologies.  “Seen together we are the world’s 12th largest economy. We also claim superpower status as far as culture and sports are concerned.   And – as you see we are champions in modesty too!”

The summit meeting between the heads of state and government took place in the White House on Friday morning. Topics of discussion included security and defence issues, immigration and the refugee crisis, climate change, energy and Arctic issues, economic and trade relations, and development and humanitarian aid.

Following the discussions, Secretary of State John Kerry hosted a lunch to the leaders at the U.S. Department of State. Friday’s programme ended with a state dinner hosted by President Obama and his spouse Michelle Obama at the White House.

On Saturday morning President Niinistö laid a wreath at the Tomb of the Unknown Soldier at Arlington National Cemetery.

The other Nordic countries were represented by their prime ministers. Foreign ministers, including Minister for Foreign Affairs Timo Soini from Finland, were also participating in the visit. The foreign ministers had a separate meeting with Secretary of State John Kerry.

The Presiden’t spouse Jenni Haukio and the spouses of other Nordic leaders were also accompanying. The spouses had their own programme, hosted by Michelle Obama. This included a visit to the Renwick Gallery displaying American art and handcraft.

The official visit was a continuation of the summit meeting arranged in Stockholm in September 2013, when President Obama met with president Niinistö, as well as the prime ministers of Denmark, Iceland, Norway and Sweden.