President Niinistö visited Tartu on 22 June 2018 to celebrate Estonia’s centenary of independence and Midsummer. He was joined by the presidents of Iceland, Latvia, Lithuania, Poland and Georgia, who had also been invited by the President of Estonia Kersti Kaljulaid to mark the occasion.

The day culminated in the Gaudeamus song and dance festival for students. President Niinistö gave an address to the festival crowds, congratulating the Republic of Estonia and its citizens on the centenary of independence. “The word gaudeamus means ‘Let us rejoice’. On this Midsummer night, we certainly have much to rejoice in; in this gathering here, in Estonia’s one hundred years of independence and in the opportunity to celebrate it here together, free and in a spirit of unity.”

The day began with a formal lunch hosted by the Mayor of Tartu Urmas Klaas, which was followed by a visit to the University of Tartu. In his speech, President Niinistö made reference to the university:

“For many centuries, the University of Tartu has acted as a mirror for Estonian society. Estonian has been the language of learning at Tartu for a hundred years. And it was a hundred years ago that close academic links were first established between Tartu and Finland. In Finland today, we take great pride in the thousands of graduates, both Finnish and Estonian, who have gained their knowledge and skills at this university. Over the course of a century, intellectuals and political leaders from both countries have also continued to come together here, in the famous spirit of Tartu.”

Students and learning remained at the centre of the celebrations throughout the day, with the visit to the university followed by a meeting between the presidents and a group of secondary school pupils at the Ahhaa science centre. The students were invited to take part in a quiz, with each president contributing a question. “Which Finnish-Estonian children’s author originally wrote under the name Mihkel Kera?” was the question chosen by President Niinistö. The correct answer was Mika Keränen, Tartu’s official City Writer and 2018’s Expatriate Finn of the Year.

The launch of the song and dance festival was preceded by a dinner hosted by President Kaljulaid, during which the presidents gathered to greet the Gaudeamus torchlight procession. Following the dinner, the official opening ceremony of the Gaudeamus festival took place on the banks of the River Emajõgi. Gaudeamus is the largest festival of its kind in the Baltics, with more than 4,000 dancers and vocalists gathering in Tartu each year.

The date that formally marks 100 years of Estonian independence is 24 February 2018. However, official celebrations first began in April 2017, as this is the time when, one hundred years ago, the Estonian governorates were amalgamated into a single administrative area. The celebrations are set to continue until 2 February 2020, the 100th anniversary of the Tartu Peace Treaty.

Raigo Pajula/Office of the President of the Republic of Estonia 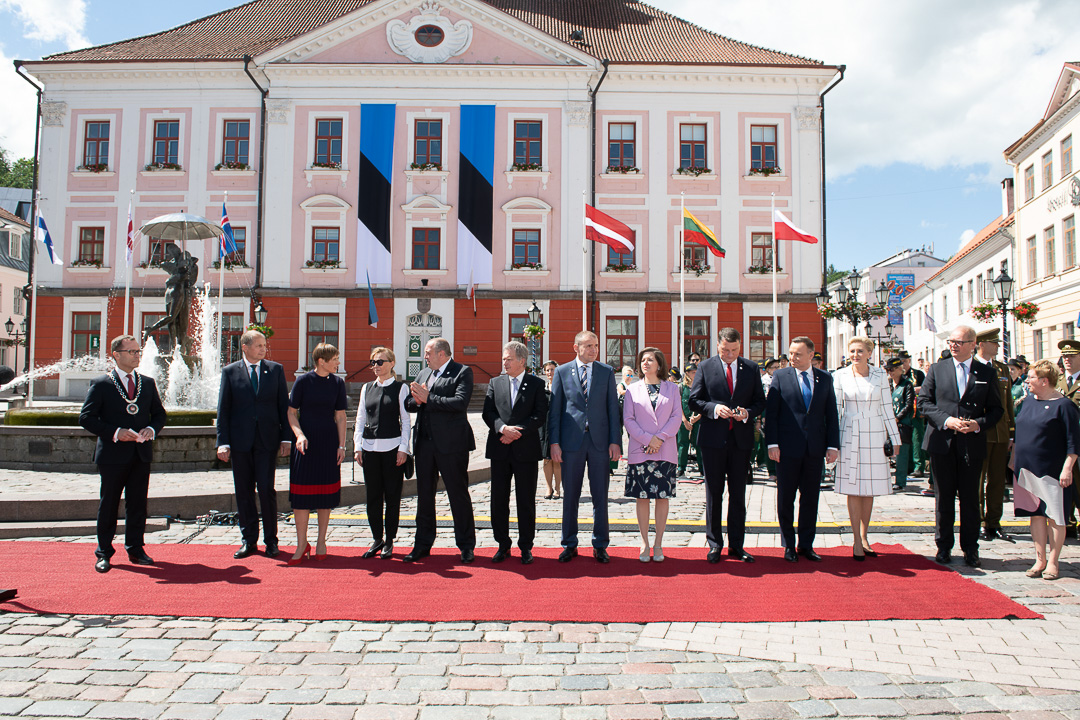 Raigo Pajula/Office of the President of the Republic of Estonia 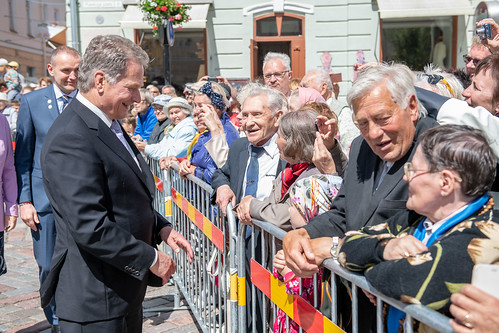