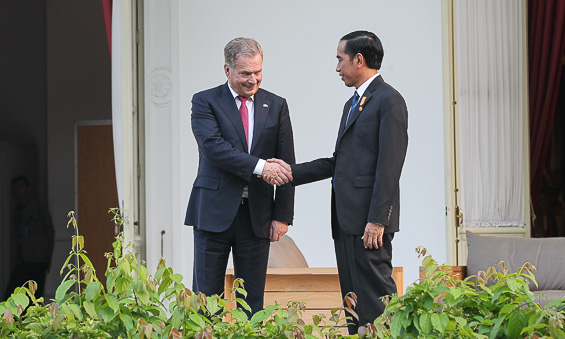 Indonesia’s emerging economy is the largest in Southeast Asia and holds the prospect of major opportunities for economic cooperation. Topics of discussion included cooperation, especially in the energy and infrastructure sectors where Indonesia is enacting major reform projects. An energy cooperation agreement (MoU) covering sustainable, clean and renewable energy and energy efficiency was signed during the visit. Finnish education and forest-sector expertise, in which there are opportunities for Finnish actors, are also of interest in Indonesia.

In addition, Finland and Indonesia are engaged in global cooperation in the areas of peacekeeping and peace mediation. The Aceh peace agreement was signed in Helsinki ten years ago, in a process presided over by President Martti Ahtisaari.

Regional issues, such as Asian regional developments and EU-Indonesia relations, were also discussed. The international issues raised included climate change and preparations for the Climate Summit in Paris, as well as the situation in the Middle East and the fight against terrorism.

A business delegation with representatives from the energy, infrastructure and ICT sectors was also present. A seminar on economic relations between Finland and Indonesia was arranged in Jakarta during the visit.