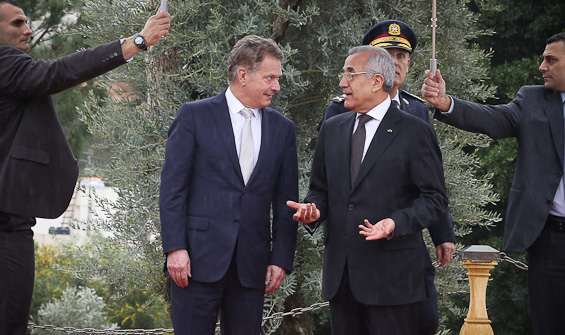 President Niinistö and President Sleiman held official talks in Beirut on 14 March. Copyright © Office of the President of Lebanon

The situation in Syria and the regional consequences of the Syrian crisis were on the agenda at a meeting between President of the Republic Sauli Niinistö and the President of Lebanon Michel Sleiman held in Beirut on Thursday 13 March 2014.

The presidents discussed the economic and social pressure imposed on Lebanon by the flood of Syrian refugees. President Niinistö said the refugee situation in Lebanon is unprecedented and extremely difficult. Both presidents emphasised the importance of finding a political solution for bringing the civil war in Syria to an end.

So far, Finland has granted EUR 28.3 million in humanitarian aid to help address the regional impacts of the Syrian crisis, part of which is channelled to Lebanon. Last week, Finland announced that it would grant EUR 8 million in additional aid to Lebanon through projects coordinated by the World Bank and Unicef.

President Sleiman thanked Finland for its support and its involvement in the peacekeeping operations.

The programme following the private discussions included the planting of a tree symbolising the friendship between Lebanon and Finland, and a lunch hosted by President Sleiman. President Niinistö also held meetings with Mr Nabih Berri, Speaker of the Parliament of Lebanon, and Prime Minister Tammam Salam.

President Niinistö is visiting Lebanon on 11–13 March. The first stop was in South Lebanon, where the President of the Republic inspected the Finnish crisis management force participating in the UN’s UNIFIL operation. Around 350 Finnish peacekeepers are serving in this operation.

President Niinistö will return to Finland on the night preceding Friday 14 March.