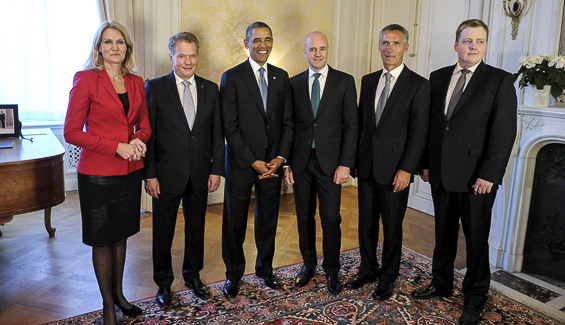 The working dinner, which lasted for more than two hours, touched on subjects such as international cooperation, combating climate change, global development policy, development of the Arctic region and the Syrian situation.

Increasing interest in the Arctic region

Combating climate change was an important topic at the meeting. The Presidents and Prime Ministers discussed ways to engage the entire international community in preventing this threat.

President Niinistö noted that interest in the Arctic region is increasing. “The global map is being redrawn in some sense. We are seeing what you might call a New North, with the Nordic countries and perhaps Finland in particular in a key role.” President Niinistö also pointed out that Russia remains an important player, holding more than half of the Arctic region within its borders.

In a joint statement released after the working dinner, the Nordic countries and the USA condemned the use of chemical weapons in Syria and announced closer security policy cooperation. The statement also includes a commitment to work together on issues including combating climate change, development of the Arctic region, promoting of human rights and global development issues.