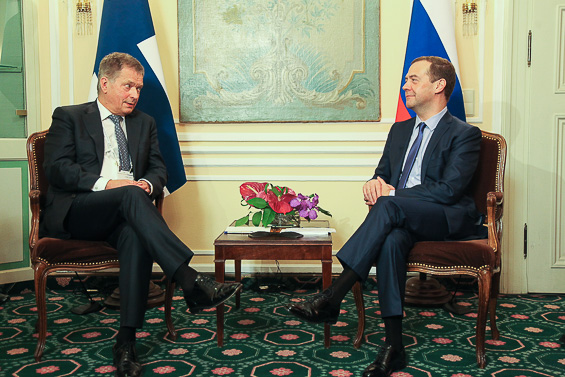 President Sauli Niinistö and Russian Prime Minister Dmitri Medvedev met at the international Munich Security Conference on 12 February 2016. Copyright © Office of the President of the Republic of Finland

It is good that we have open lines of communication between Finland and Russia, President Niinistö said at the beginning of the meeting. In addition, the Finnish and Russian Prime Ministers and Ministers of the Interior recently held talks on the refugee crisis.

According to President Niinistö, it has been impossible to be oblivious of the new developments on the border with Russia. Previously, a reciprocal arrangement between our countries prevented people from crossing the border without a visa, the President said. “As far as asylum seekers are concerned, both Russia and Finland are safe countries. Asylum seekers should therefore not have the right to choose between the two.”

Our border authorities have been involved in intense discussions, the President said. “We all hope that a mutually satisfactory solution can be reached.”
After the meeting, President Niinistö announced that he would pay a visit to Russian President Vladimir Putin this Easter.