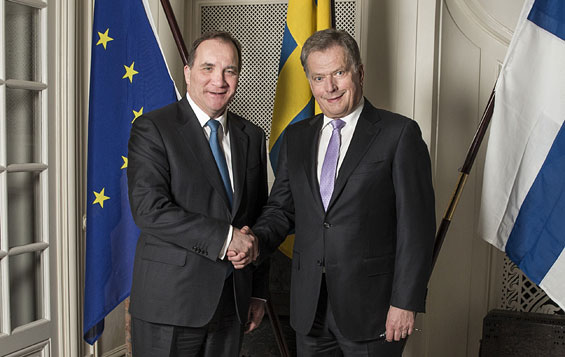 President Niinistö and Prime Minister Löfven discussed the security situation in the Baltic Region and Northern Europe, and bilateral cooperation between the two countries in foreign, security and defence policy.

They also discussed the coming U.S.-Nordic Leaders Summit. Nordic heads of state will meet President of the United States Barack Obama in Washington D.C. on 13 May.

NATO report among the issues discussed

The NATO report recently published in Finland was also touched upon in the meeting. President Niinistö commented on the new report in an interview with the Finnish Broadcasting Company after meeting Prime Minister Löfven.

“I think that it is a good report. Taking account of the history and updates of the document, I think that it gives a good overall understanding of where Finland is today.”  According to the President, the report discusses “rather a lot of” questions and issues pertaining to Finland’s NATO membership and non-membership.

President Niinistö pointed out that Finland and Sweden will make their own decisions concerning NATO membership, if there is any need or desire to do so. The president commented, on a theoretical level, on the question of whether the countries should become NATO members together. “Of course, that can only happen if it has public support in both countries. That, I understand, is how democracies work.”

“Our fates are not automatically entwined,” said the President, referring to Finland and Sweden. “The decision-making process seems to be fairly complex. Of course, both countries will take care of their own decision-making. However, this does not alter the fact that they may influence each others’ opinions.”

According to President Niinistö, the Government will take its own stand on joining NATO in a report of its own. “In my opinion, there is no current need for us to change our existing policy.”

The presidential couple participated in King Carl XVI Gustaf of Sweden’s 70th birthday celebrations in Stockholm on Saturday. The programme included a lunch hosted by the City of Stockholm and a banquet held at the Royal Palace.