Home / President Niinistö met the Secretary General of the UN 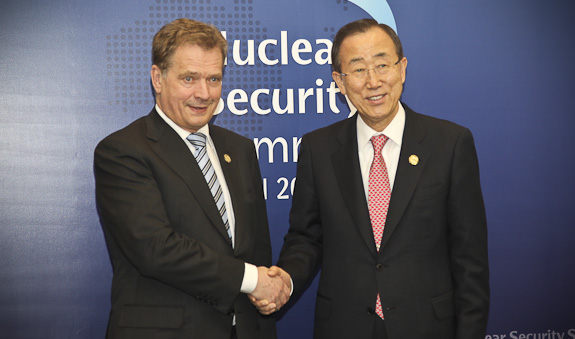 President of the Republic Sauli Niinistö met Ban Ki-Moon, Secretary General of the UN, in Seoul, South Korea, on Monday 26 March 2012 in connection with the Nuclear Security Summit.

In the private meeting held before the beginning of the summit, Mr Ban acknowledged Finland’s strong support for the United Nations and its organisations. President Niinistö said that a small country like Finland appreciates the opportunity to participate in the UN on an equal basis with all other member countries and promised that Finland would continue to play an active role.

President Niinistö and Mr Ban also discussed the Middle East and the situation in Syria, sustainable development and the Rio+20 summit to be held in June. They also talked about peace mediation. Mr Ban expressed his appreciation for Finland’s support to UN peacekeeping activities, and both agreed that investments in peace mediation and conflict prevention are worthwhile, as they conserve peacekeeping resources.

This was President Niinistö’s second meeting with the Secretary General of the UN. The previous occasion was Mr Ban’s official visit to Finland in 2009, where President Niinistö was present in his capacity as Speaker of Parliament. Both gentlemen had fond memories of their previous meeting.