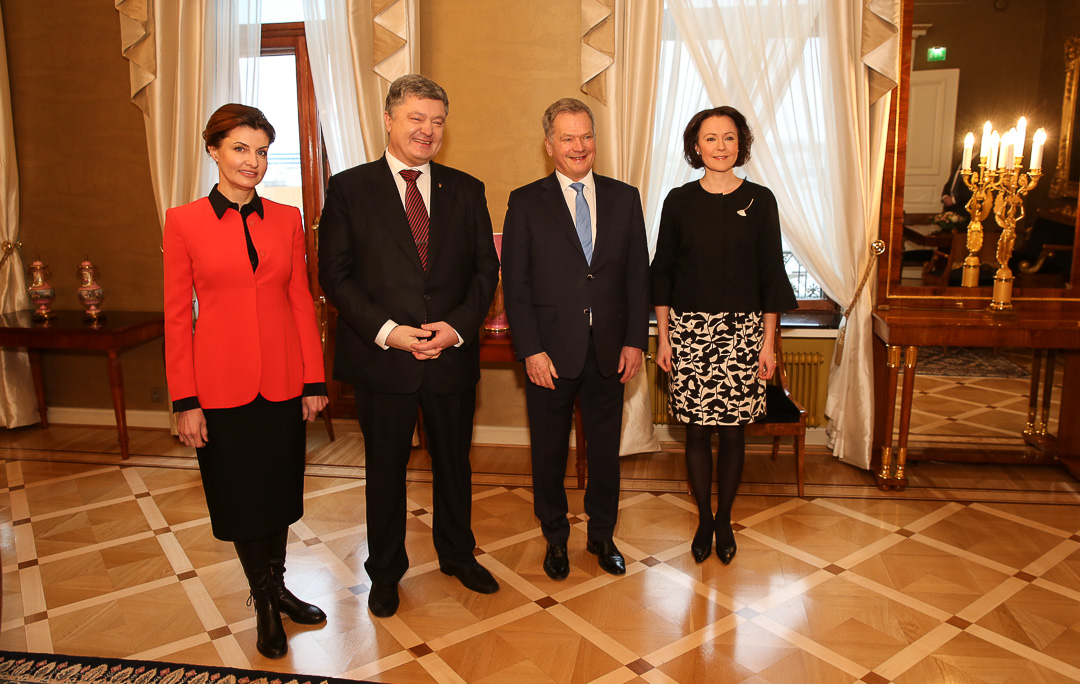 “Finland supports the territorial integrity and sovereignty of Ukraine. That is why we condemn the illegal annexation of Crimea by Russia,” said President of the Republic Sauli Niinistö upon meeting with Ukrainian President Petro Poroshenko on Tuesday 24 January 2017 in Helsinki.

Accompanied by a delegation, the Ukrainian President was the first head of state to visit Finland during the centenary year of its independence. The presidents discussed relations between Finland and Ukraine, the Ukraine conflict and the implementation of the Minsk Agreement. In addition, they exchanged views on relations between the EU and Ukraine, as well as topical international issues.

Minsk Agreement should be implemented

At the press conference following the meeting, President Niinistö emphasised that implementing the Minsk Agreement was a matter of urgency.

“The Minsk Agreement is vital. It should be fulfilled as soon as possible, so that we can return to normal in Ukraine and even wider in Europe. Both parties have obligations which they should fulfil. Finland is very supportive and is prepared to do everything to help achieve the objectives of the Minsk Agreement,” stated President Niinistö.

The idea proposed by US President Trump, of relaxing the sanctions against Russia in return for Russian commitments to participating in the war against terrorism, was mentioned at the press conference. Both presidents believed that no changes should be made to the sanctions. The sanctions should only be lifted when the related terms are fulfilled.

“I thank Finland for its firm position to preserve the sanctions against Russia until the full completion of the Minsk Agreement,” commented President Poroshenko.

President Niinistö mentioned that Ukraine had made several social, political and economic reforms.

“This is very good and we will support Ukraine going forward on that road. Finland has supported visa freedom for Ukraine in the EU and – naturally – will continue to do so,” President Niinistö commented.

President Poroshenko thanked President Niinistö for Finland’s support. The presidents also discussed economic relations between Finland and Ukraine. Matters such as the Trade Commission between the two countries were mentioned during the discussions.

“Now would be a proper time to put the Trade Commission working again. We have a very good start already by our ministers in that respect,” said President Niinistö.

During the visit, Minister for Foreign Trade and Development Kai Mykkänen and Vice Prime Minister, Minister of Regional Development, Building and Housing and Communal Services Hennadii Zubko signed a memorandum of understanding between Finland and Ukraine on energy efficiency and renewable and alternative forms of energy. The energy sector is a key area ofcooperation between Finland and Ukraine.

“I regard the memorandum of understanding signed today, on the energy sector, as highly symbolical. It confirms that we must intensify and further expand our cooperation,” said President Poroshenko.

“Our connections are numerous. I have visited Kiev and we have met all over the world. We will next meet in Munich in February. Thank you for this visit, which I greatly appreciate,” said President Niinistö, to round off the conference.

This year will mark 25 years since diplomatic relations between Finland and Ukraine were resumed and 99 years since they began.