Home / President Niinistö on a state visit to Canada 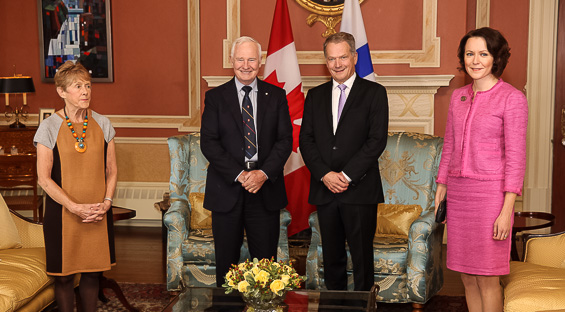 President of the Republic Sauli Niinistö and Mrs Jenni Haukio made a state visit to Canada from 8 to 11 October 2014. The official programme began with a visit to the Canadian Parliament and a meeting with Prime Minister Stephen Harper in Ottawa on Thursday, 9 October 2014.

Topics discussed during the meeting between the President and Prime Minister focussed on the Ukraine crisis and Russia’s actions during the crisis, including its violations of Ukraine’s sovereignty. Other topical international issues discussed included the situation in the Middle East, particularly the activities of the terrorist organisation Isis in Syria and Iraq.

With regard to Arctic issues, President Niinistö and Prime Minister Harper agreed that the countries should enhance their cooperation, particularly in the fields of scientific and technological research and collaboration between Canadian and Finnish businesses. The recently established Arctic Council serves as a driver for increasing cooperation.

President Niinistö and Prime Minister Harper also expressed their satisfaction at the signature of the EU-Canada free trade agreement CETA. Once it is ratified and implemented, this agreement will increase trading opportunities between Canada and Finland. 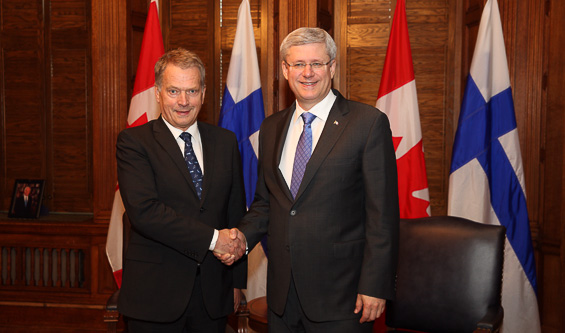 President Sauli Niinistö and Prime Minister of Canada Stephen Harper met on 9 October in Ottawa. Copyright © Office of the President of the Republic

On Thursday morning, President Niinistö also met Andrew Scheer, Speaker of the House of Commons, and representatives of trade and industry.

The official reception ceremony for the state visit was held on Thursday afternoon, when Governor General David Johnston and his spouse received the presidential couple in their official residence in Ottawa.

“It was 24 years ago that the President of Finland last stood in this same spot,” said President Niinistö in his greeting, referring to the previous state visit. Finland and Canada are two Arctic nations whose close relations are being celebrated and reinvigorated by this state visit. “We already have strong ties, as should be the case up here in the north. Our common roots are well-established, with the number of Canadian Finns totalling 130,000.”

From Ottawa to Toronto

On Friday 10 October, the visit continued in Toronto, where the President met Elizabeth Dowdeswell, Governor of the Province of Ontario and representatives of trade and industry. Mrs. Jenni Haukio visited Suomi-koti Seniors’ Centre for the Finnish community in Toronto.

In the afternoon the presidential couple visited the University of Toronto and Hockey Hall of Fame.

Ice hockey player Saku Koivu, who played for Montréal Canadiens in 1995-2009, joined the state visit as a member of the Service d’honneur. A person who has promoted relations between the two countries in his or her specific field, and made Finland known in the country visited, can be invited to join the Service d’honneur on state visits.

President Mauno Koivisto made the previous state visit from Finland to Canada in 1990 and the Governor General of Canada, Adrianne Clarkson, made a state visit to Finland in 2003.