Home / President Niinistö on a state visit to Estonia: Relationships must be maintained in several directions 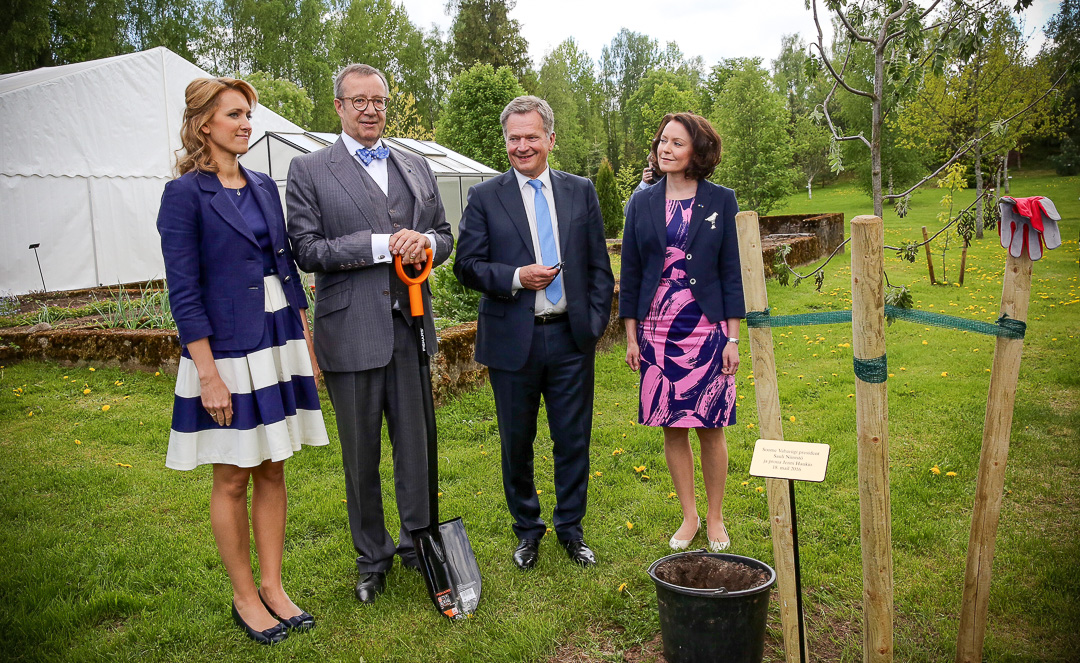 President Niinistö planted a rowan in the garden of President Ilves’ family farm at Ärma. Photo: Juhani Kandell/Office of the President of the Republic

President of the Republic Saul Niinistö and his spouse Mrs Jenni Haukio were on a state visit to Estonia from 17 to 18 May 2016. During the visit, President Niinistö and President of Estonia Toomas Hendrik Ilves have discussed bilateral relations, regional cooperation and security.

According to President Niinistö strong connections exist between Finland and Estonia in all areas of life and society. “Our discussions referred less to problems than to our shared vision of how to make our countries – and perhaps even Europe and the whole world – a better place to live through joint innovation,” commented the President at a press conference in Tallinn held after the talks.

The future of the EU was also discussed. The presidents agreed that the EU should look back on its fundamental values, the maintenance of peace and security.

Joint opportunities in the future

Tuesday’s programme also included a ‘Future Forum’ held at the Tallinn University of Technology Innovation and the business centre at Mektory. This event featured a discussion on the future of economic relations and the development of cooperation between Finland and Estonia.

President Niinistö believes that the Finnish and Estonian economies are sensitive to turbulence in the global economy and that reforms are necessary to meet the challenges involved. “Both countries need new markets, products, partnerships and attitudes,” said President Niinistö.

On the other hand, even small countries can thrive in the face of global competition by focusing on excellence in specific areas. “Global megatrends such as climate change, sustainable development and digitalisation are creating high demand for cleantech, smart cities and new digital solutions. Both Finland and Estonia have a great chance of tackling such issues and would also benefit from such a development economically”, President Niinistö said.

On the second day of the visit, Wednesday 18 May, the presidents and their spouses visited Viljandi, where a question and answer session was held with upper secondary school students. From Viljandi, their journey continued to President Ilves’ family farm at Ärma.

The presidents’ spouses had their own programme, including cultural attractions and a visit to the Tallinn Finnish School.

The President’s entourage included Minister of Local Government and Public Reforms Anu Vehviläinen, whose programme was focused on ICT issues.

President Niinistö made an official visit to Estonia at the beginning of his term of office in the spring of 2012. President Ilves made state visits to Finland in 2007 and 2014. In addition, the presidents have met on numerous occasions during working visits and international events.

President Ilves’ term of office will expire in the autumn, and President Niinistö’s state visit is the final one during the Estonian President’s term. President Niinistö thanked his fellow head of state for their fruitful partnership over the years: “We have had a strong mutual understanding from the beginning, not even the usual quarrels between brothers and sisters,” President Niinistö remarked.