Home / President Niinistö on countermeasures: The escalation of the trade war to a point where we start to use other terms must be prevented

President Niinistö took part in a panel discussion held in Valkeakoski on the future of Finnish football. Copyright © Office of the President of the Republic of Finland

President of the Republic Sauli Niinistö commented on the Russian countermeasures to Western trade sanctions during a visit to Valkeakoski on 7 August 2014.  “This is not merely a question of sanctions and countermeasures. These are simply the weapons being used in the great conflict currently building up before our eyes. What worries me most is how to break this cycle: how, for example, we are going to lift the sanctions when the time comes. Not much thought has been given to that question yet. Above all, it is vital to prevent the chill spreading, or the escalation of the trade war to a point where we need to start talking in other terms.”

The President pointed out that the countermeasures imposed by Russia were no surprise, and commented on the proposal that Finland should hold direct negotiations with Russia on the countermeasures. “As a member of the EU, we were one of the nations imposing sanctions on Russia. And now we should go and say we meant no harm, and ask to be forgiven. That does not sound like a course of action we as a nation should be taking. Naturally, if there are any aspects of the sanctions or any future countermeasures that are open to interpretation and require clarification, we must consult specialists, and the Russians, and go over such issues with a fine-tooth comb.”

When asked for his opinion on whether Finland should ask the EU to pay compensation for the financial losses caused by the countermeasures, the President replied: “That would be excellent. We have upheld solidarity, we have taken part in joint decision-making, and we are likely to be harder hit than most other EU Member States.”

The President of the Republic was in Valkeakoski to take part in a panel discussion on the significance and future of Finnish football. The discussion is part of the Valkeakosken Haka football club’s 80th anniversary festivities. 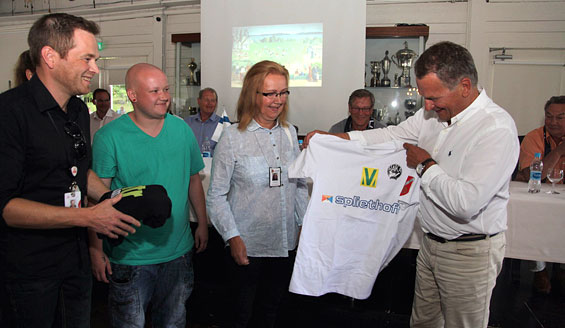 President Niinistö was also given a Haka jersey. Copyright © Office of the President of the Republic of Finland