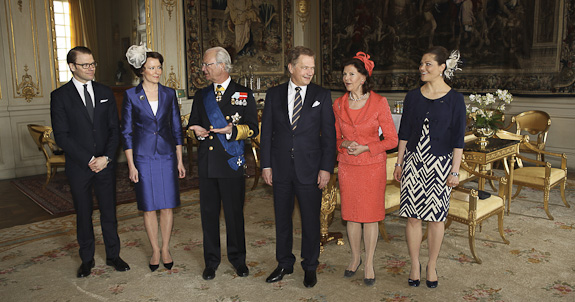 President of the Republic, Sauli Niinistö, and his spouse, Jenni Haukio, made their first state visit to Sweden on 17–18 April 2012, at the invitation of King Carl XVI Gustav of Sweden.

In the afternoon, President Niinistö met Per Westerberg, Speaker of the Swedish Parliament, and Fredrik Reinfeldt, Prime Minister of Sweden. Topics of discussion included bilateral relations between Finland and Sweden, EU and regional issues, and current international topics. According to the heads of state, relations between Finland and Sweden are uniquely close, and this is of the utmost importance to both nations. However, there are opportunities for further expanding cooperation, particularly in foreign policy and with respect to the neighbouring regions.

After the talks and the related press conference, President Niinistö spoke at the Stockholm School of Economics. The first day ended with a banquet at the Royal Palace.

School visit and development prospects in the field of science

On the second day of the visit, Wednesday, 18 April, the presidential couple visited a Finnish school in Upplands Väsby, where they familiarised themselves with teaching in the Finnish language and met pupils and teachers. This followed by a visit to the Karolinska Institutet, for a presentation of the extensive development plans of the institute, particularly regarding the Life Science cluster. The programme also included a visit to the research laboratory.

Jenni Haukio, the spouse of the President of the Republic, attended a programme of her own for part of the first day of the visit. Together with Queen Silvia, she visited Moderna Museet, the Swedish museum of modern art, and Hyper Island, a digital media educational institution.

Minister for Foreign Affairs Erkki Tuomioja also attended the programme of the first day of the state visit.