Home / President Niinistö on the situation in Ukraine: “The threat or use of violence is a breach of international law” 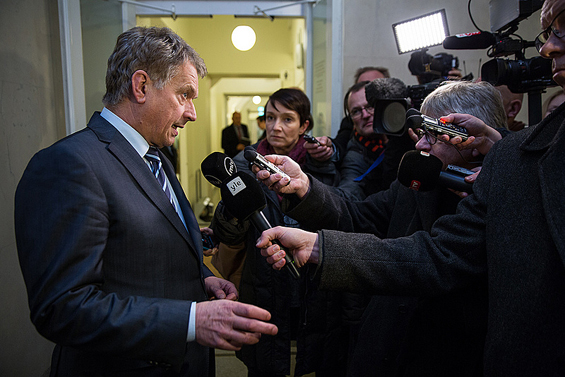 President of the Republic Sauli Niinistö and the Cabinet Committee on Foreign and Security Policy debated the situation in Ukraine on Sunday 2 March. “The threat or use of violence is a breach of international law, and this is how the Russian actions in relation to Ukrainian sovereignty would appear,” said President Niinistö to the media after the meeting.

President Niinistö urged the parties to the crisis to keep calm, and emphasised the importance of maintaining an open line of communication with Russia. “Two important guidelines are followed within the EU. The first is that the EU itself has a clear picture and a distinct common view of the situation. The second is that the line of communication with Moscow is kept as open as possible.”

President Niinistö estimated that at the moment the danger of a random act is at its most critical. “The greatest hazard, now that the atmosphere is so tense, is that something may start that nobody actually intended. Unfortunately, there is always a risk when people are armed and emotions are running high.” According to the President, there are no national security concerns for Finland arising from the situation.

President Niinistö discussed the Ukraine situation with President of France Francois Hollande on Sunday evening. In their phone conversation, the presidents underscored the need to find a peaceful solution to the crisis as soon as possible.

President Niinistö has also discussed the situation with President of Russia Vladimir Putin over the telephone. In their conversation on Friday 28 February, both presidents expressed their agreement on the importance of maintaining an open line of communication between Russia and the European Union.