Home / President Niinistö on the World Press Freedom Day: Freedom of expression lies at the heart of democratic societies 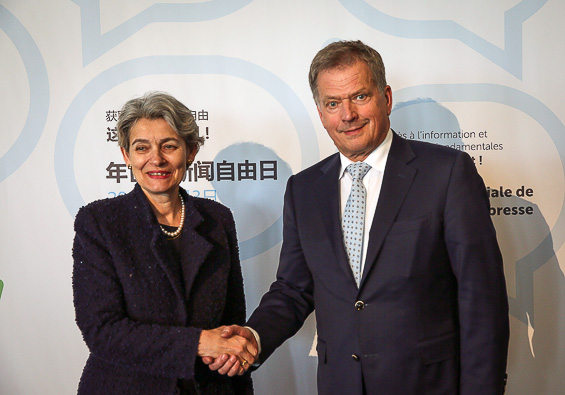 President of the Republic Sauli Niinistö participated in the World Press Freedom Day prize ceremony on Tuesday, 3 May. In his address, President Niinistö emphasised that freedom of expression is at the core of democratic societies.

According to President Niinistö, freedom of expression and press freedom are also an important part of implementing the UN’s 2030 Development Agenda. Finland puts a particular focus on the rights of women and the most vulnerable population groups, and the link between high-quality education and freedom of expression. “Education promotes media literacy and offers capabilities for civic participation,” said the President.

Held in Helsinki on 3–4 May, the World Press Freedom Day attracted more than 1,100 journalists and media professionals from over a hundred countries. President Niinistö is the patron of the event. The event was now held for the 25th time, and for the first time in the Nordic countries. The event also celebrates the 250th anniversary of the Nordic Freedom of Press Act. Driven by Anders Chydenius, the Act was the world’s first piece of legislation protecting press freedom.

In international surveys on freedom of the press, Finland has held the top position for several years in a row. According to President Niinistö, the underlying factors to Finland’s success include public official documents, protection of sources and the goal of providing everyone access to fast telecommunications connections. “A key priority must be the protection of journalists. We want to see all journalists, both online and offline, have the possibility to work without a risk of being persecuted and without having to be afraid of their and their family’s safety,” said President Niinistö.

President Niinistö also met Irina Bokova, Director-General of UNESCO. The President and the Director-General discussed matters such as the importance of freedom of expression and press freedom in resolving conflicts and preventing hate speech and violent extremist movements. They also addressed the reorganisation of the United Nations and topical foreign and security policy issues.