Home / President Niinistö on Ukraine: The key to ending the violence is in the hands of the Ukrainian government and president 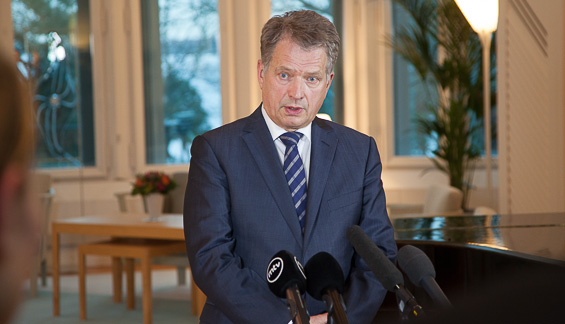 While President of the Republic Sauli Niinistö strongly condemns the use of violence by all parties in the Ukraine, he believes that the keys to resolving the situation now lie in the hands of the country’s government and president. “A channel for negotiations should be opened between non-governmental organisations, the opposition and the government. This is the only path towards ending the violence,” said President Niinistö at Mäntyniemi on Wednesday 19 February.

President Niinistö expressed his deep concern about the situation in Ukraine. “The violence we have had to witness is shocking. We in Europe are not unaffected by this. Ukraine is nearby, with Kiev just a two-hour flight from Helsinki.”

The President said that he was in touch with the Foreign Minister and with the Embassy of Finland in Ukraine, and that there were no signs of an improvement in the situation.

EU foreign ministers will meet tomorrow to discuss the Ukrainian situation and sanctions are likely to be proposed. “Unfortunately, sanctions rarely have an immediate effect, although they are a demonstration of political will,” stated President Niinistö. The President also reminded his listeners of the role of the Council of Europe and the OSCE.

President Niinistö also expressed his hope that the EU and Russia would discuss the issue. “Both have a mutual interest in bringing an end to the violence.”