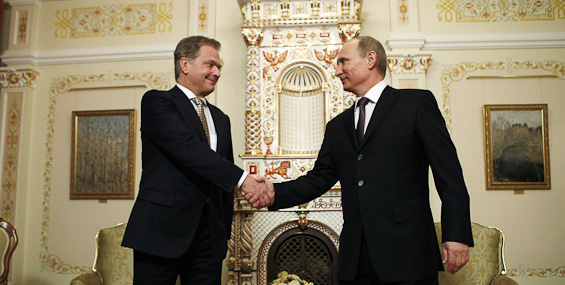 President of the Republic Sauli Niinistö continued his visit to Moscow on Tuesday 12 February with private talks with Russian President Vladimir Putin at the latter’s official residence at Novo-Ogaryova.

The presidents discussed a wide range of topics including economic relations, border crossing issues, Arctic cooperation, protection of the Baltic Sea and a number of international issues such as the Russian G20 Presidency. Both parties asserted their commitment to the development of economic relations.

Focus on the economy

The focus on the economy during this visit was emphasised by the presence of a corporate delegation which had lunch with the presidents. The enterprises represented brought up concrete challenges that they have faced when operating in Russia.

On Tuesday morning, President Niinistö visited the Finnish stand at the Prodexpo food fair in Moscow together with Jari Koskinen, Minister of Agriculture and Forestry.

Meeting with the Prime Minister

On the first day of this working visit, Monday 11 February, President Niinistö met Russian Prime Minister Dimitri Medvedyev at the latter’s official residence at Gorky. Their talks covered economic issues, relations between the EU and Russia, the northern dimension, Arctic cooperation and the Baltic Sea.

On Monday evening, President Niinistö met representatives of Finnish enterprises operating in Russia, some of which were participating in the Prodexpo food fair.

President Niinistö and the corporate delegation returned to Finland on Wednesday 13 February.