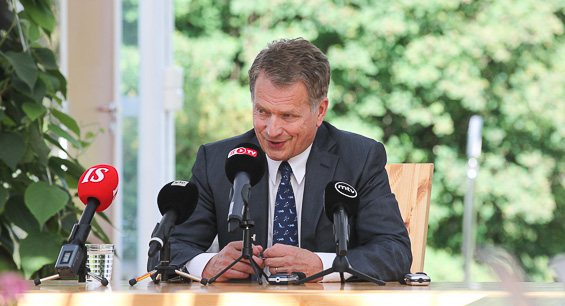 President of the Republic Sauli Niinistö opened the second Kultaranta Talks on 8 June in Naantali at his summer residence. President Niinistö stressed in his opening address that Finland will make its own assessments and decisions concerning its security policy.

The debate should take on a wider aspect: what is realistically threatening us? “Is it an extensive European crisis or something more local, like that in Ukraine?” President Niinistö asked.

Finland should consider what is on the whole the best way to ensure the country’s safety and international position. Nato is one option, but it also comes with certain consequences and obligations. We must assess which model or combination of models works best for us and our times. Finland and Finland alone will assess its position and make decisions independently.

Change in the spirit of the times

According to Niinistö, the times have changed now. “Here in Europe, the Ukrainian crisis and steps taken by Russia affect the atmosphere, our current agenda, outlook and expectations to a large extent. And the crisis is still ongoing, too,” added Niinistö. “Now, too, we must view what changes are taking place and take the necessary steps but at the same time be sensitive to the things that are perhaps not changing that much.”

The relationship between Russia and the West is difficult at the moment. “This crisis between relations has its background and reasons, although few could see this crisis erupting. I do not think anyone can be sure what this crisis can lead to. There are so many unknown factors. We must do our utmost to ensure that the dent in Europe’s security system can be repaired in duo course. And particularly to ensure that there will be no further dents.”

President Niinistö reminded that Finland has been living in peace as Russia’s neighbour for about 70 years and relations between the countries have remained functional, although there have been difficult times, too. “I am not saying that this is the full picture, as I am sure some people hold other views as well. But whose view is relevant to us? Ours or those of others, and how should either be weighed? This is something we must think for ourselves.”

According to President Niinistö, one of the conclusions of last summer’s Kultaranta Talks was that whatever the decision regarding Nato, we must take care of our own national defence system. “Partnerships, such as a defence partnership with Sweden, are elements that promote this. But an international dimension to our defence – whether it is obtained through a partnership or joining an alliance – is nevertheless only a support system. We must be responsible for the credibility of our defensive system.

Niinistö considers it to be in Finland’s interests not to be too harsh about the European security and defence policy. “The European defence policy and assistance has a contractual basis although practical implementation is not in place yet.  – – I consider it politically impossible that the EU would not support a member country that was caught in a conflict. And I think it inevitable that we should look further into the future. Right now many European countries are forced to assess the spirit of the times, whether it was such a good idea to reduce their defence capability after all. Many are surely thinking whether joint efforts by the EU could be employed to help the situation. This would create a momentum for the development of a joint security and defence policy.”

President Niinistö reminded that although security solutions must be addressed, economic issues still pose the greatest security threat. “Economy is not just about GDP and budget deficits, economy can shake the entire society to its foundations.

Finland’s great asset has been integrity, and that is something we cannot lose.” Finland’s future and economic and social reforms will be discussed in Kultaranta on Monday afternoon.

The first debate in the morning will consider the crisis in Ukraine, recent developments in Russia and the position of Finland, under the title “The bear is awake, what about Finland?” This will be broadcast live on Yle TV1 and Yle Areena from 9.30 am to 11.00 am. The afternoon debate will be broadcast on Yle Areena. You can join the debate on Twitter by following #Kultaranta.