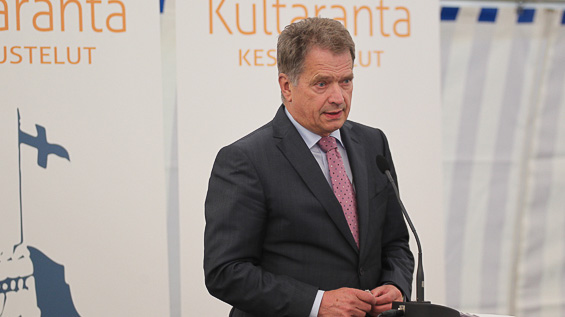 “Why do we need a forum like this?” asked President of the Republic Sauli Niinistö when opening the Kultaranta talks on Sunday 16 August. “We tend to talk at cross purposes. I believe that we should try to avoid this today and tomorrow so that we can make real progress.”

In his opening remarks, President Niinistö called for a straightforward and transparent discussion instead of repeating the old routine where every speaker is convinced that he is right and everyone else is wrong. “We have repressed emotions that burst out whenever anyone mentions defence policy or security policy, forcing the discussion into well-worn and predictable paths,” said the President.

As an example, the President mentioned the public debate on air surveillance in Iceland. Once the Foreign and Security Policy Committee of Parliament had investigated what participating in this air surveillance actually entails, there were no problems to be found. But before that, public debate had taken on a life of its own. “It came down to ‘yes we should’ versus ‘no we shouldn’t, ‘NATO good’ versus ‘NATO bad’.”

The President noted that the questions invited and submitted before the Kultaranta talks also reflected this attitude. “Finnish public debate is seen as somewhat evasive. Some feel that people are too easily branded and pigeon-holed.”

Speech with many themes

Mulling over several themes in his speech, President Niinistö touched on the prolonged economic crisis, the politics of power and human rights.

“The Third World War will be fought by means of the market economy,” he said. The President remarked that there has been a significant change in the world in the past 15 years. Money has always talked, of course, but it used to be Western money that talked. “Now it is no longer Western money that talks but some other money entirely. The West is shackled by its debt. That’s a huge change, you know. It’s like someone used to using a hammer suddenly finding that they are the nail instead,” said Niinistö. “Someone may say that this is just economic policy, but I say that this is not economic policy at all. This is all about the politics of power.”

President Niinistö acknowledged that not all of the emerging economies that are our trade partners have a “clean bill of health” as far as human rights are concerned. Should Finland be seeking to outsource Finnish work to countries with shortcomings in human rights and democracy?

“Perhaps we should be even more vigorous about addressing human rights and the progress of democracy in countries to which we give development aid – and have been doing so for decades? No one seems to be talking about that,” said the President.

“Nevertheless, I myself feel that we must of course address human rights and democracy issues.”

In conclusion, President Niinistö pointed out that there was no pre-prepared script for the talks. “It is up to you to decide how to get the ball rolling. I want to encourage everyone here to engage boldly and transparently in the conversation.”