The rules based international order has been a victim of the changes in the global picture, President Niinistö said in his opening remarks at this year’s Kultaranta Talks event on Sunday 17 June 2018.

“We seem to be sliding into a world where strongman personalities outweigh permanent institutions, and where unilateral power speaks louder than multilateral agreements and common norms and values.”

“Five years is a very long time in international politics,” the President added. An annual event, the Kultaranta Talks on matters of foreign and security policy have been taking place since 2013. In that time, the change in the global picture has been dramatic.

President Niinistö characterised the current situation as “very serious” and argued that now was the time to stop and think about what is at stake. “To put it baldly, the absence of order means disorder or even chaos. The absence of rules means no rules or somebody else’s rules, rules dictated without our consent.”

In his address, President Niinistö made reference to how images from the G7 summit in Canada appeared to portray division, while images from the Shanghai Cooperation Organization summit in China demonstrated unity. “If the west is seen as weak and divided, it will be much more difficult to defend the order we have created and the values this order represents. Yesterday’s rule makers can become tomorrow’s rule takers.”

According to President Niinistö, there is ample reason for countries like Finland to be concerned about the international order falling apart. “For a country like Finland, a reliable multilateral system is an essential component of our security and welfare,” he said. However, it is not enough to be worried, he went on to say. “What we need now is action to turn the tide, and that is why we are here.”

In his opening remarks, President Niinistö highlighted the themes for the upcoming panel discussions; the international rules based order, the European Union and the dynamics between economic prosperity and wellbeing.

President Niinistö went on to ask whether the international organisations created after the Second World War, particularly the United Nations, remain capable of making a difference or whether the world is about to the enter a completely different new era. “The European Union has always spoken about the value of multilateralism but is anybody listening? Is it possible for us to balance economic prosperity and sustainability?”

He concluded his remarks by saying that the real strength of the Kultaranta Talks has always arisen from the whole group of people present, not just the distinguished panellists. “This is supposed to be a genuine conversation where every participant has an equal voice. I encourage you to use it. Let’s challenge each other but also listen to each other.” 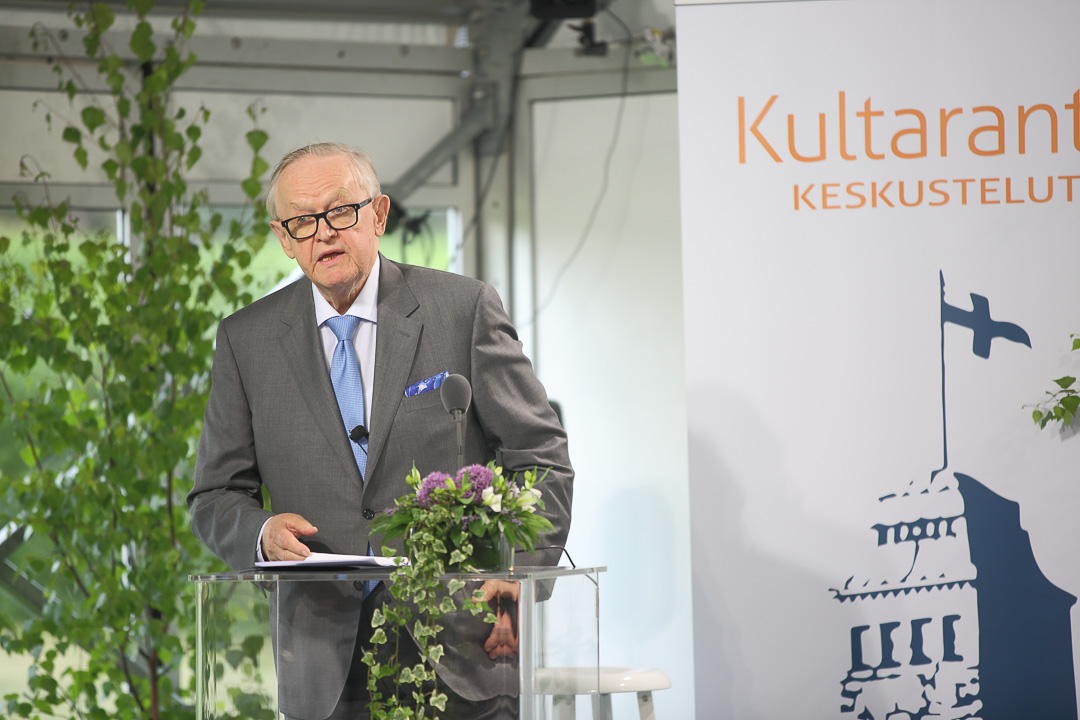 The first day of the Kultaranta Talks concluded with an address by former president of Finland, Martti Ahtisaari. He said he continues to believe in the United Nations, although witnessing the deliberate violence, grief and suffering caused by conflict has led him to wonder whether the UN has succeeded in fulfilling its mission and what can be done to make it more effective.

“The United Nations does not exist in a vacuum but reflects the surrounding world. Its ability to take action is very much defined by the five permanent members of the Security Council, most importantly the United States and Russia,” president Ahtisaari said.

He argued that many of the problems faced by the UN are caused by the fact that its values are often disregarded by the very nations that have agreed on them. He was also at pains to stress the universality of those values. “Let me get this straight,” he said, “these values are not only western values, they are global values. By referring to democracy, human rights and the rule of law as western, we have done the world a disservice.”

Opening discussion: power and strength or a shared order?

The opening discussion of the Kultaranta Talks on Sunday focused on the growing role of power and strength in the international arena. The panellists considered the weakening of the rules based world order. The key issue for all three the importance of identifying ways to persuade both ordinary citizens and the world’s political leaders of the benefits of the rules based system.

The Kultaranta Talks are due to continue on Monday, when the audience will be hearing from the United Nations Secretary-General António Guterres. The panel discussions will focus on the future of the European Union and strategies for promoting economic prosperity and environmental sustainability.