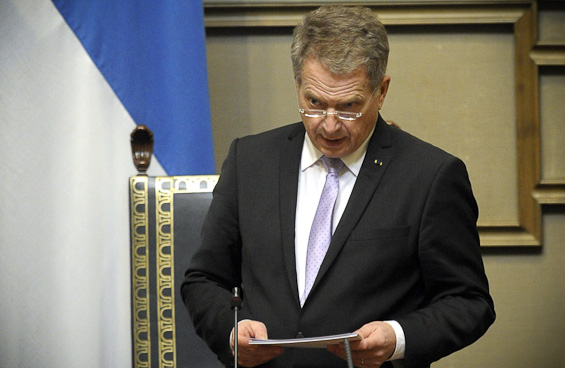 President of the Republic Sauli Niinistö opened the 2014 session of Parliament on 4 February. In his opening speech, the President warned against increasing inequality and emphasised the importance of setting a good example.

President Niinistö told of a recent study according to which the 85 richest people in the world own as much as the poorest 3.5 billion. “In other words, the ratio is approximately 1:40 million. No world map has the scale necessary to illustrate this gulf between people’s lives. I do not believe that such a disparity in quality of life will be tolerated for much longer; more uprisings are in prospect. For the moment, the world is far from having achieved its final form,” the President said in his opening speech.

He referred to the Arab Spring, Syria, and the latest uprising in Ukraine, whose eventual outcomes are not yet known, but which all have in common that “the people have had too much to bear and have come to understand more”. In addition, extremist elements are striving to take advantage of instability wherever it appears. “There is no such thing as enlightened despotism. When power is used without democracy, the result is always arbitrary rule.”

“Neither has Europe [achieved its final form]. The economic crisis has posed challenges to even the traditional democracies,” President Niinistö said. “But we must learn, even under duress; a nation can pass through hard times by borrowing, but it must wean itself off credit sooner or later.”

According to President Niinistö, the income gap in Finland is small when measured globally, but even here, losses in income hit those hardest who have to compromise on the necessities.

“In Finland, we must strive to preserve our social stability. At the moment, we have a general consensus that Finland cannot rest on a foundation of growing indebtedness. In other words, a major task lies before the present government and Parliament. Balancing the public sector so as to maintain basic confidence in the economy and future will be challenging,” President Niinistö said to the Members of Parliament, who began the last session of Parliament during the current electoral term.

President Niinistö reminded the listeners of the importance of moderation and a sense of fairness and the old truth that one should lead from the front, in other words, by setting a good example. “If leaders do not set a good example, it is unreasonable to expect others to behave well. Due to the economic crisis, good governance has become a topic of debate. [It concerns] the general line taken on the economy and public sector activities, encompassing everything from practical ethics to efficiency. There is certainly room for improvement on all points of the scale. We should move on from debating the issue to action directed towards putting sound administrative principles into practice.”

“In addition to finances and emotions, we must also discuss continuity and long-term commitment, guaranteed by public sector involvement. It is also difficult to envisage that functions now arranged under a legal obligation could be left to volunteer activity or generosity alone. We should examine where the line should be drawn,” President Niinistö said.

At the end of his speech, President Niinistö addressed security and defence policy issues.

At the beginning of the year, the President participated in a security policy seminar in Sälen, Sweden. According to him, the spirit of Sälen was that the security and defence policy interests of Finland and Sweden are largely shared, and there is a strong intent to promote these together. President Niinistö expected the co-operation to be conducted on multiple levels and to proceed step by step.

“Finland and Sweden have a similar position and ideas concerning EU security co-operation and the development of the NATO partnership. It is therefore good that we keep each other well informed and strive to agree on a common policy line.”

President Niinistö also highlighted cyber security. “Our key functions are more and more dependent on information technology and data networks. Cyber influence forms a part of the picture of future conflicts separately or alongside other ways of applying pressure or using force.  While the cyber dimension is not pervasive, it is present. We still have much to do in this respect. We need new legislation. We need to put strategies into practice. All this must be implemented without violating fundamental rights or the protection of privacy,” said the President.