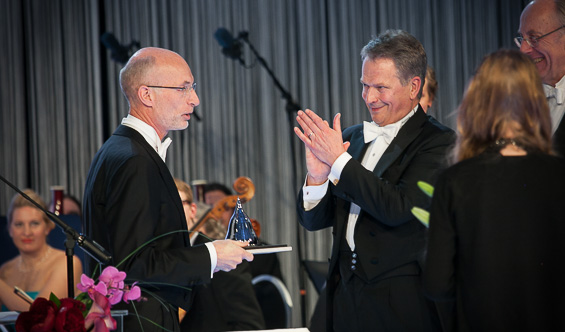 Professor Stuart Parkin received the 2014 Millennium Technology Prize from President Niinistö. Copyright © Office of the President of the Republic of Finland

President of the Republic Sauli Niinistö presented the 2014 Millennium Technology Prize to Professor Stuart Parkin on 7 May 2014. Professor Parkin received the Prize in recognition of his discoveries, which have enabled a thousand-fold increase in the storage capacity of magnetic disk drives. His innovations have led to a huge expansion of data acquisition and storage capacities, which in turn have underpinned the evolution of large data centres and cloud services, social networks, music and film distribution online.

”Innovations do not appear out of nowhere. They require hard work and curiosity from researchers. Equally necessary is the way in which the society around researchers functions and provides support”, President Niinistö said in his speech. ”In Finland, we have considered it extremely important to invest in cutting edge science, research and technology. Our successful education system and educated workforce are essential factors in advancing high level research.”

”I also want to emphasize that science, research and technology promote democracy and equality in our societies. The Millennium Technology Prize has successfully enhanced these values already during a decade.”

According to President Niinistö, we Finns and people all around the world are confronted with the same challenges: population growth and climate change. ”Scientists carry out groundbreaking work to find solutions to these and other challenges facing mankind.  So, let us today celebrate science and scientists, their achievements and breakthroughs.”

The Millennium Technology Prize is awarded to groundbreaking technological innovations that enhance the quality of people’s lives in a sustainable manner. The President of the Republic is the Patron of the Prize. 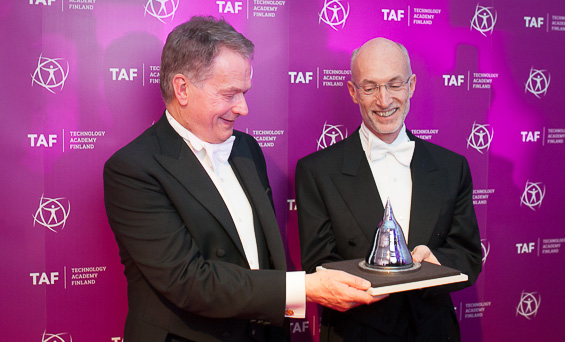