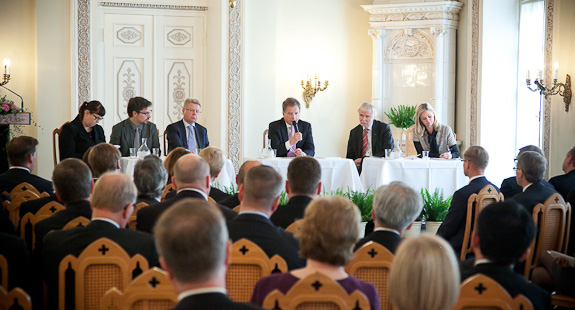 The importance of promoting exports is widely recognised. However, it is also important to attract foreign investments in Finland, as they create jobs and boost the economy, President of the Republic Sauli Niinistö pointed out at a seminar on the economy organised on Thursday, 4 October.

“Finland places at the top of nearly all studies on competitiveness. Finland has a first-rate operating environment for ‘doing business’. What is paradoxical is that this is not reflected in the number of foreign investments in Finland,” said President Niinistö at a seminar organised at the Presidential Palace for around fifty representatives of foreign businesses.

The President listed some facts that in his opinion should be emphasised to foreign investors: Finnish society is stable, peaceful and safe, and the Russian market is close and easily accessible. Moreover, the Baltic Sea region offers synergy benefits for international business.

“In the end, trust is the foundation on which all interaction is based,” President Niinistö stressed. “Finns may not talk much, but we keep what we promise.”

Business environment has room for development

President Niinistö expressed his hope for the benefits of Finnish society as an investment target being recognised abroad – an aim also highlighted by the Finnish country brand and Team Finland (an operating model created by the Ministry of Employment and the Economy aimed at attracting foreign investment and capital). 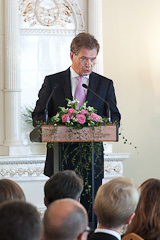 “These represent steps in the right direction,” Niinistö said, “but certain aspects of our industry and trade policy undoubtedly contain room for further development of the Finnish business environment.”

After the opening speech by the President of the Republic, Minister of Economic Affairs Jyri Häkämies presented the Team Finland strategy for promoting foreign investment, which was published on the previous day, Wednesday, 3 October.

“The proposal sets the objective that, in terms of percentage of GDP, Finland’s stock of direct foreign investments will exceed the EU average by 2020,” Häkämies said.

In 2011, the stock of foreign investments in Finland totalled slightly over EUR 60 billion, i.e. 32 per cent of GDP, while the European Union averaged 42 per cent.

“To achieve this, the flow of investments must be set on a permanent growth track.”

After the speeches the floor was opened for questions and comments by representatives of companies that have invested in Finland. Topics that were raised included cooperation with Russia and the operating conditions of the mining industry. Another issue that surfaced was the desire for government to adopt a more proactive approach to communication towards investors.

In his closing remarks President of the Republic Sauli Niinistö once more stressed the stability and reliability of Finnish society.

“I believe that they are our key strength in all business operations that have long-term objectives.”