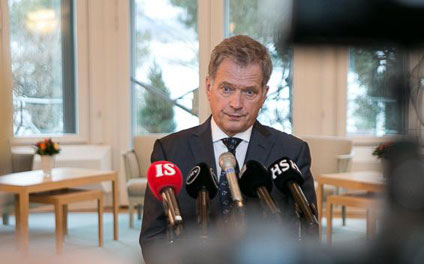 According to President Niinistö, Finland’s response is clear. “I already stated it when presenting our condolences. We will, of course, support France in every way possible.”
On Tuesday, the President of the Republic and the Ministerial Committee on Foreign and Security Policy agreed on a policy according to which Finland is prepared and willing to demonstrate solidarity with France in accordance with and in the spirit of the EU treaties, and will assist France by any means in its power.

“The military dimension was also mentioned in this regard. Finland is unable to respond in such a manner, as our legislation does not permit such assistance,” the President stated in a press conference in Mäntyniemi.

President Niinistö also commented on Russian President Vladimir Putin’s confirmation of the fact that a bomb had been placed on board the passenger jet downed over Sinai.

“I detect a similar spirit in the attitudes and statements of both Presidents. Deep sorrow and offence at these brutal terrorist attacks, but also great determination to defeat terrorism.”

According to President Niinistö, efforts should now be made to eliminate the factors forcing people to flee their home countries, and to build peace in Syria and the Iraq region. “If this shared attitude is suggestive of a willingness to engage in more extensive dialogue, also involving the United States, it will raise hope that new groundwork can be laid in Syria.”