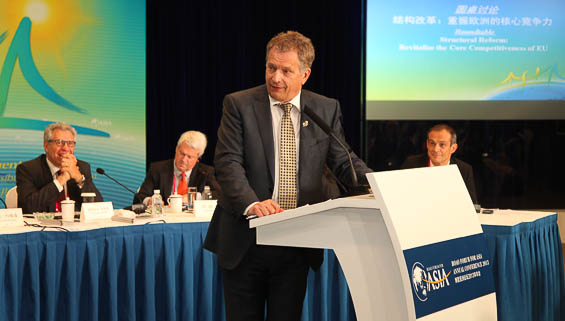 President of the Republic Sauli Niinistö attended the high-level Boao Forum on the island of Hainan on Sunday 7 April. The event was hosted by Xi Jinping, President of China.

President Niinistö gave a talk at the opening session of the Forum and was the keynote speaker at a session on the economic situation in Europe. The President noted that Europe faces considerable challenges and that past performance is no guarantee of future success. Coping requires innovation, but innovation requires a strong democratic process and social cohesion. In the future, the most successful societies will be those that are both resilient and capable of change. All countries will face challenges.

4/7/2013 Speech at the Structural Reform Revitalize the Core Competitiveness of EU – Roundtable at Boao Forum for Asia, 7 April 2013