President of the Republic Sauli Niinistö met UN Secretary-General Ban Ki-moon in New York on Sunday, 23 September 2012. The President and the Secretary-General discussed Finland’s bid for non-permanent membership of the UN Security Council, peace mediation, and the situation in Syria.

Secretary-General Ban commended Finland’s active approach in strengthening the position of women. On Monday, 24 September Finland will host the high-level event on “Women’s Access to Justice” together with South Africa and UN Women.

President Niinistö and Secretary-General Ban also discussed the present situation in Syria. They agreed that it is important that the international community as a whole and the UN Security Council in particular show uniformity in their actions towards resolving the crisis. President Niinistö voiced his full support for the work of Lakhar Brahimi, Secretary-General Ban’s Special Representative for Syria.

President Niinistö is in New York to attend the opening of the 67th Session of the UN General Assembly as the head of the Finnish delegation. He will deliver Finland’s statement as part of the general debate on Tuesday, 25 September. 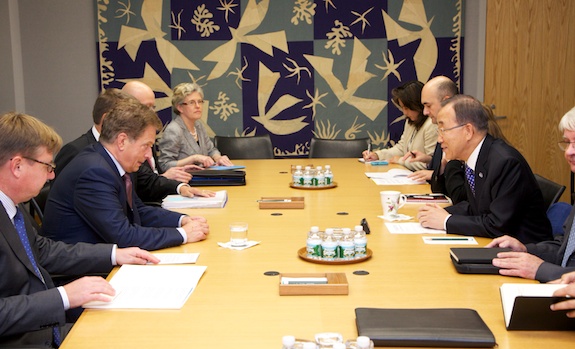