Home / President Niinistö: The fight against climate change is also a form of security policy 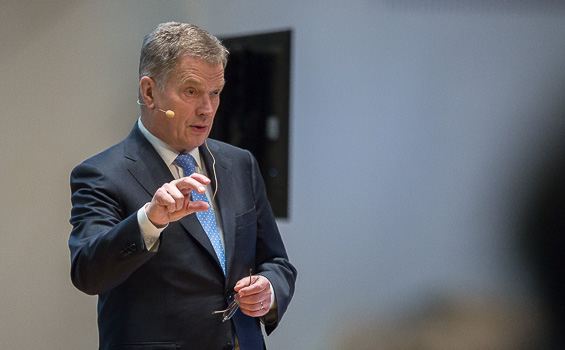 According to President of the Republic Sauli Niinistö, the fight against climate change is also a matter of security and economic wellbeing. “This issue is fundamental to all aspects of our existence. In terms of food, water, waste water, breathable air, flooding and migration, it is mainly a security problem.”

President Niinistö was speaking at a climate change business seminar held in Finlandia Hall on Wednesday 17 February. In his speech, the President referred to an award, presented at the Munich Security Conference, for security achievements in 2015. This year, the prize was awarded to Laurent Fabius and Christiana Figueres, the President and Executive Secretary of the Paris Climate Change Conference. “This speaks volumes about what the underlying issue really is. It is also a security issue,” the President said.

Finnish expertise will do the job

“Cleantech and sustainable development are two of the fundamental requirements of our continued existence, and Finland has the expertise to do well in this area,” the President said. President Niinistö also discussed the recent state visits to Turkey and Indonesia, in which a Finnish business delegation was involved. Problems affecting urban metropolises – such as those related to drinking water, waste water and air quality – were raised during meetings with the mayors of Istanbul and Jakarta. “I realised that the group of Finns accompanying me was able to provide an immediate, concrete and enthusiastic solution to every problem. I was impressed. This bodes well for Finland.”

“Attitudes have also changed a great deal during the year,” President Niinistö said. A consensus has emerged that something must be done. “I think this is a major wake-up call, which has produced a visible and lasting reaction due to the need to act. People want clean air to breathe, water to drink and efficient transport. This will inevitably continue to be the case and will open doors for Finnish clean tech.”

The climate change business seminar was organised by the Federation of Finnish Technology Industries, the Finnish Innovation Fund Sitra and the Climate Leadership Council.