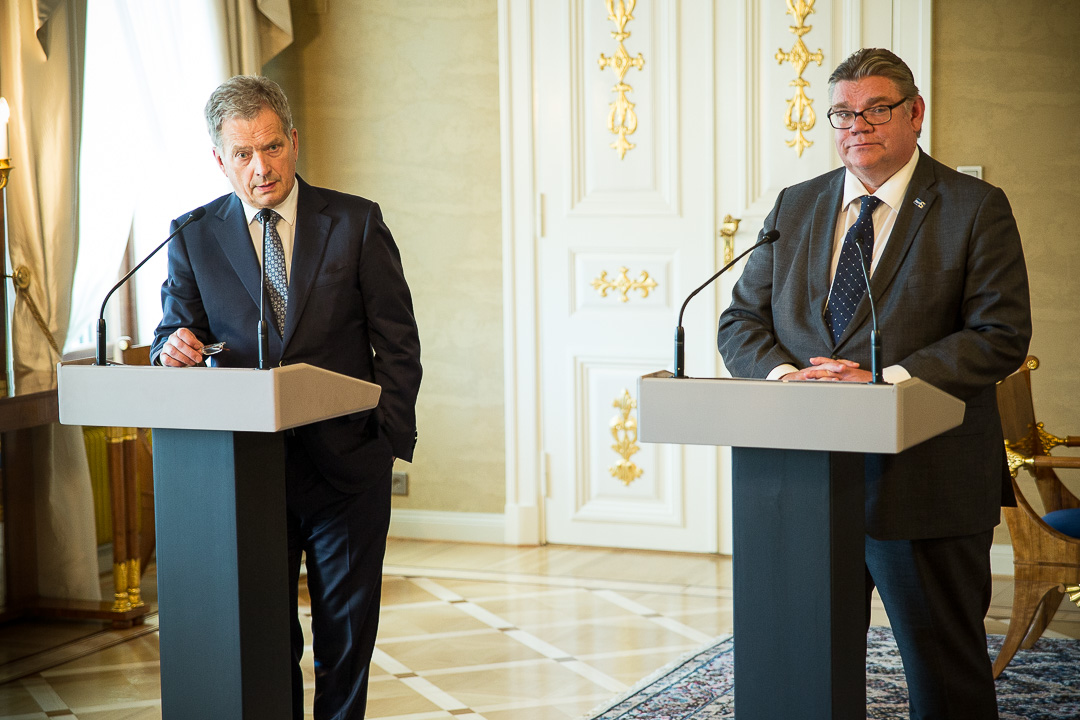 President Niinistö and Minister for Foreign Affairs Timo Soini at the press conference held in the Presidential Palace on 30 September 2016. Photo: Matti Porre/Office of the President of the Republic of Finland

The President of the Republic held a press conference in the Presidential Palace on 30 September 2016. The theme of the press conference was Finland’s participation in the investigation of the destruction of flight MH17, which was shot down in Ukrainian airspace. Minister for Foreign Affairs Timo Soini was also present.

President Niinistö reiterated that, in the late summer of 2014, the Dutch public prosecutor’s office had presented Finland with a request for legal assistance with respect to BUK missiles in Finland’s possession. “We decided to grant this assistance on a very tight schedule. And we provided it as requested.”

“Of course, this request, because it was made on such a tight schedule, caused us some headache and we had to give it a bit of thought. Today and, of course, at the time it seemed only natural that Finland would help in the investigation of such a terrible crime.”

We have received several requests for legal assistance

President Niinistö also pointed out that commercial law had to be taken into account:  “Naturally, the contract based on which the BUK missiles were bought from Russia is governed by the standard confidentially provisions relating to weapons deals. While it clearly seems natural that we would provide information, commercial law does not always seem so natural. We had to give thought to this issue.”

We have received several requests for legal assistance since then. In 2015, Finland was asked to blow up a BUK missile and deliver the fragments to the Dutch public prosecutors. Dutch officials were present when the missile was blown up, and the fragments were sent to the Netherlands.

“I would like to stress that we have had to return to the original dilemma as each of these events has transpired: How do the terms of the purchase contract cohere with the handover of the fragments to a third party? You could there say that we were between a rock and a hard place.”

Last spring, new requests were sent relating to the BUK missile. “At the same time, a request was made that everything which Finland had duly delivered over the last couple of years be handed over to an international investigation team,” the President added.

A Finnish team will go to the Netherlands

President Niinistö stated that no decision had yet been made on providing additional material. In making such a decision, the Ministerial Committee on Foreign and Security Policy, which is headed by the President of the Republic, would also have to decide on whether or not this involved deviating from the original request presented to Finland: “That confidential matters would be disclosed to the Dutch public prosecutor’s office, for later use in a trial. Since no trial is being held at the moment, this new request somewhat broadens the scope of the issue. The matter may or may not be problematic in this respect. That is why we still need to consider the matter together.”

President Niinistö referred to the new request by stating that it involves a great deal of additional content and requests for new evidence. To be clear about what is being asked of Finland, the Ministerial Committee on Foreign and Security Policy has decided to send a Finnish team to Holland to discuss the matter. The President said that the other side of the issue would also be discussed in the Netherlands: “Which is that Finland is making fairly bold decisions on this matter. Will we receive support if queries are made about this? We cannot avoid asking this question.”

Finland has gone to extreme lengths to be of assistance

The President made the following comments on Dutch accounts, published during the week, of Finland’s participation in the investigation: “It is, of course, slightly disconcerting that when the Dutch authorities themselves swore us to secrecy on the issue, it is now being discussed over there. I would ask people to understand that this has not been easy. We have continuously had to ponder very, very complex questions, as you can perhaps imagine. It is therefore more than surprising that we have been reproached for going to extreme lengths to be of assistance.”

The President added that the matter had not been discussed with Russia: “We made sure that Russia was informed, in 2014, that we had received a request for legal assistance and that we would act in accordance with the request. We have informed them. There was no discussion of the matter.”

Video of the press conference (in Finnish)