Home / President Niinistö to ambassadors: Security cannot be based on hitching a free ride 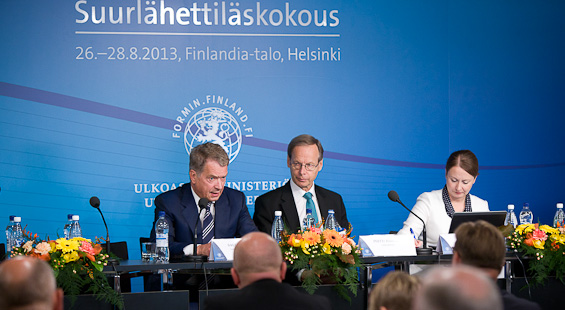 Approaching her centenary, independent Finland is again in search of an identity, said President of the Republic Sauli Niinistö, addressing a meeting of ambassadors at Finlandia Hall on 27 August 2013. “Our principal challenges are now economic and social. Our foreign and security policy supports our response to those challenges by ensuring our national security and our influence in the international community.”

In the opening of his speech, President Niinistö recalled the Kultaranta talks that he hosted in June, whose main goal was attained. “That is, the goal of bringing different opinions – and factions – into direct dialogue with one another. Trying to convince someone who disagrees with you is very different from preaching to the choir,” said the President. “And we need really deep thought to come up with convincing answers, because many of the old standard answers, and even the questions themselves, are beginning to show their age.””

The President remarked that the Kultaranta talks introduced new nuances into the EU and NATO debates even if the basic dividing lines remain the same. “The EU will probably never revert to being just a free trade area, but we are also beginning to see the practical limits of the benefits to be gained from closer integration. There are no easy answers even to where we are now, let alone where we should go from here,” he said.

Finns are critical of the EU in some respects but view it with common sense and restraint. “It is not in Finland’s national interests to support just any integration development, but disintegration is not a good idea either. We know that and we acknowledge that. Europe is in a transition, seeking a place to be and a direction to go. In this transition, we need to be committed but realistic.”

Sitting on the fence is a good place to be 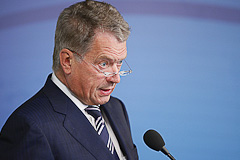 The President went on to say that the talks exploded a few ingrained conceptions about NATO. “One of these is the notion that NATO membership would be a replacement for a strong national defence, the idea being that if we don’t have enough money or willpower on our own, we can just join an alliance and have someone else worry about it.” The point that President Niinistö was making was that national security cannot be based on hitching a free ride. “That will not seem like such a good idea when the chips are down. We must continue to maintain our own defence, whether we belong to an alliance or not.”

According to President Niinistö, close cooperation with NATO and the potential for applying for membership at some point is well in tune with our national interests. “We have freedom to take action, we have choices available, and we have room to observe and to operate. As long as this state of affairs serves us well, there is no particular urgency to jump over the fence,” said the President. “Finland decides on her position and her direction herself, in accordance with her interests and acknowledging the context that history may place us in at any given time.”

The third theme touched on by President Niinistö in his speech was human rights. Preaching from the moral high ground is very easy. It becomes much more difficult “when you need to think about and promote not just human rights but other interests too, and with satisfactory outcomes all around”. 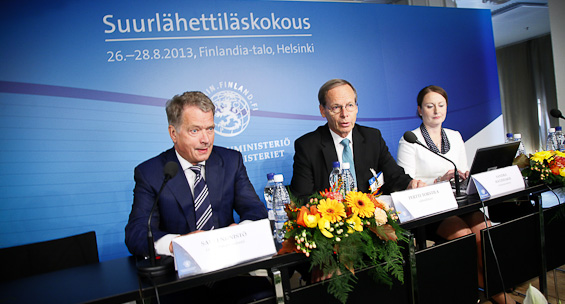 “The problem is not so much that our message on human rights and democracy is not heard; it is that in many countries that message is simply not considered appropriate,” said the President. He noted that we must avoid smugness and self-aggrandisement in this as in so many other matters.

At the annual ambassadors’ meeting organised by the Ministry for Foreign Affairs, the nearly 100 heads of foreign diplomatic missions in Finland come together to discuss topics related to Finland’s foreign, security and defence policy, economic relations and development policy.