Home / President Niinistö to Finland’s national football team for the EURO 2020 finals: You are a wonderful example of cooperation

President of the Republic of Finland Sauli Niinistö met Finland’s national football team, the Huuhkajat, on Thursday, 3 June 2021. At the beginning of the meeting, which took place from Mäntyniemi through a video call, the President presented the Huuhkajat with the Key Flag Symbol of the Association for Finnish Work.

“Generally that key is awarded for winning, but the Association for Finnish Work believes that already reaching the European Championship finals is equivalent to winning. Congratulations!” said President Niinistö.

Head coach of the national team Markku Kanerva thanked the President on the team’s behalf. “This team has worked long and hard to achieve this – and the work goes on.”

Head coach Kanerva said that creating the team spirit was a joint effort, and everyone shares responsibility for building a great atmosphere. The first match of the finals on 12 June will be an emotional moment for everyone: “We feel that now a dream of generations is coming true; now we are putting it into practice.”

“We have an absolutely fantastic spirit in the team, a humble and ambitious group of players,” said team captain Tim Sparv. “It’s great to be here and now we’re going to challenge some tough teams at the European Championship finals.”

President Niinistö said that the Huuhkajat show how a common goal can be jointly pursued without focusing on particular individuals.

“This will certainly have a huge impact on the community spirit in Finland. Ultimately, we are dependent on one another, how we manage to work together. You are a wonderful example of this.”

The European Football Championship finals will be played from 11 June to 11 July 2021. The 2020 UEFA European Championships are the 16th to held. Finland’s opening match is against Denmark in Copenhagen on 12 June. 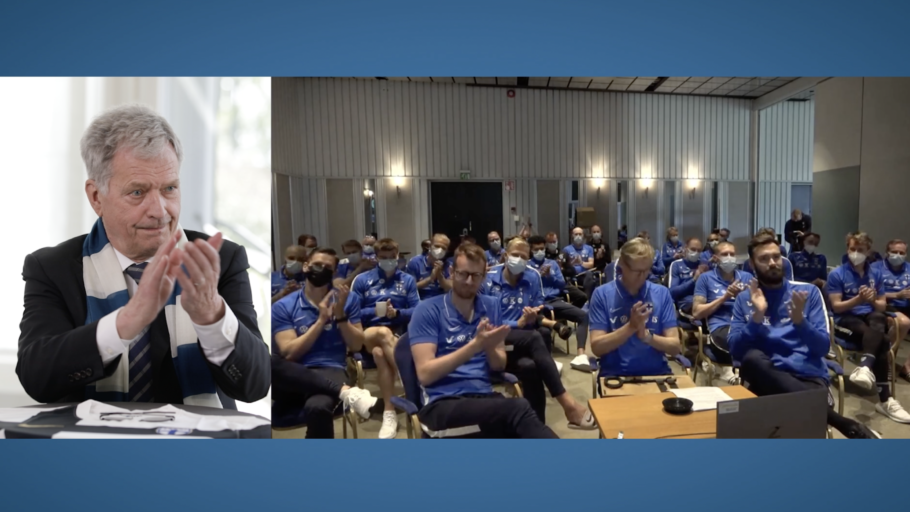