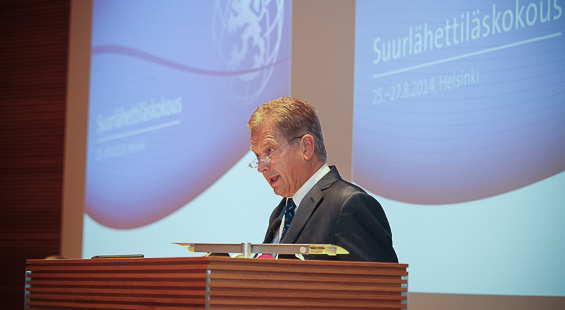 President of the Republic Sauli Niinistö calls for Finland’s foreign policy to engage in practical action in addition to voicing opinions and declaring principles. On Tuesday 26 August, President Niinistö addressed the heads of Finland’s diplomatic missions abroad, assembled at the annual ambassadors’ seminar in Helsinki.

“Finland’s position regarding the events in Ukraine has been clear ever since the beginning of the crisis. We condemn any and all violations of the territorial integrity and sovereignty of Ukraine. We have been involved in setting up sanctions imposed by the EU on Russia. We cannot excuse ourselves from responsibility regarding the principles employed in resolving conflicts in Europe. We can also not just look to our own narrow interests when our common values are trespassed upon.”

The President went on to say that this is not enough. “However, our foreign policy cannot consist solely of declaring our opinions and principles to all and sundry. We also need to think about what practical measures we want to and can undertake. And then we need to try to undertake them.”

President Niinistö made reference to the trip he took to Russia and Ukraine the week before last. “It is clear to me that it is vital to keep communication channels open between different parties. — Of course, we are not in this alone but act as part of a larger entity. Our actions support the broader international effort to resolve this conflict. ”

President Niinistö stressed that we should note that the Ukrainian crisis cannot be dissociated from its broader context: the relationship between Russia and the West. “That relationship too has fallen into a spiral of mistrust and opposition. The Ukrainian conflict is thus both a cause and a consequence of this broader crisis. The diplomatic challenge is about more than just Ukraine.”

President Niinistö said that he believed we have only seen the beginning of an in-depth international discussion of the gulf that has appeared between the West and Russia. “We need to think long and hard, not forgetting self-criticism.”

President Niinistö noted that it is through this broader picture – the opposition between Russia and the EU and uncertainty in security policy – that the Ukrainian crisis has implications for Finland. “Therefore our response must also be broader. As a Member State of the EU, we must above all attempt to facilitate a comprehensive response on the part of the EU towards resolving the crisis and curbing its knock-on effects.”

Finland is not a security vacuum

President Niinistö reminded his audience that Finland faces no military threats even though there is uncertainty in the field of security policy. “Our neighbouring regions are stable. Finland is also not a security vacuum, and we cannot afford to become one. We are managing this both nationally and internationally,” the President stressed.

President Niinistö said that Finland has always sought to uphold a credible national defence and that we should continue to do so. This, however, requires an increase in resources. The question is not one of money but of a shift in the practice of war. “The boundary between actual war and other exercise of power is becoming blurred. Means of cyber war and information war are becoming increasingly important. It is now possible to fight a war without actually being at war. At the same time, conflict escalation is setting new speed records, as we saw for instance in the Crimea.”

“This places new pressures on preparedness measures that rely on traditional threat scenarios. Finland is not too poorly off in this respect, because we focus on a strong comprehensive security approach and close cooperation between the various authorities. However, we too need to reappraise our national defence according to the spirit of the times, in terms of both capability and readiness,” said the President.

Debate on military cooperation and alliance is welcome

President Niinistö also discussed the overall security policy cooperation review that the President and the Government have decided to prepare. This will feature a broad discussion of various dimensions of cooperation, including the EU Security and Defence Policy, NATO, Nordic defence cooperation (Nordefco) and bilateral relations for instance with Sweden and the USA.

“Finland’s national defence cannot be outsourced. If we do not wish to take the responsibility, we can hardly expect anyone else to do so. On the other hand, it is neither possible to create a credible ‘hermit defence’ model. Modern technology alone prevents such isolationism. International cooperation and building a network to support that cooperation is a natural approach for modern national defence solutions,” said the President.

The President also noted that we have a political commitment to developing the Common Security and Defence Policy of the EU.  Finland should not belittle this. “On the contrary, we should be advocating and contributing to new forms of cooperation.”

The President considered that in the long term Europe must view security matters in a different way than it has up to now. Pressures towards a reappraisal are growing not only with the crisis in Ukraine but also with the turmoil in northern Africa and the Middle East. “Europe is thus facing a tough challenge exacerbated by the concern for internal security. We must respond to this with closer cooperation and more investments,” said President Niinistö. 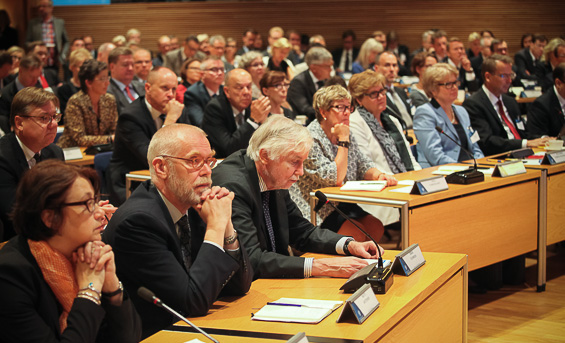