Home / President Niinistö to the diplomatic corps: We must control the Ukrainian crisis, not allow it to control us 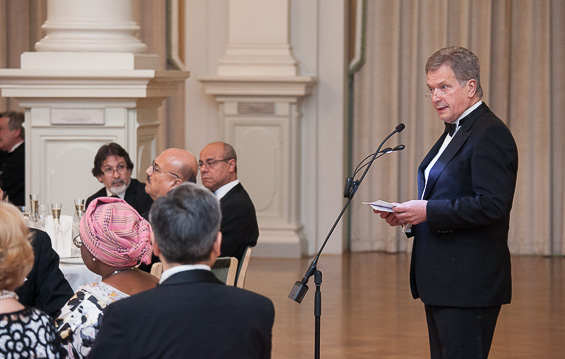 President of the Republic of Finland Sauli Niinistö and his spouse Jenni Haukio hosted the traditional dinner for the heads of diplomatic missions accredited to Finland and their spouses at the Helsinki City Hall on Tuesday 29 April 2014.

President Niinistö’s speech to the diplomatic corps focused on the Ukraine crises. According to the President, this crisis has rapidly subjected Europe’s security system to intense pressure and damage. “One must admit that the outlook is grim. – – The crisis continues and is characterised by new, very unpleasant developments such as disappearances, even murders and the seizure of OSCE observers”, President Niinistö said.

According to the President, the international community now faces a serious challenge in Europe. Further escalation of the Ukraine crisis must be avoided and the matter must be resolved through effective negotiations. This is the only way to limit the effects of the crisis, and in time, this would also enable the rebuilding of lost security and the creation of stronger mutual reassurance.

“In any case, we stand before a major decision: do we control the crisis or allow it to control us? I would emphasise that, if the crisis continues to escalate and the situation deteriorates, the second alternative unavoidably comes closer – the path to open conflict and deep instability. No one should imagine that they can control such a development and its implications”, the President said.

According to President Niinistö, there are also reasons of wider-ranging significance for resolving the Ukraine crisis. “We can rest assured that global economic, technological and climate change will not pause to await a solution to this particular crisis. Such broader transformations will continue and require more from all of us”. “We cannot afford to forget the big picture”, President Niinistö stated.

The annual dinner is attended by about 170 guests. In addition to the diplomatic corps, the guest list includes Finland’s political leaders along with top-ranking civil servants. 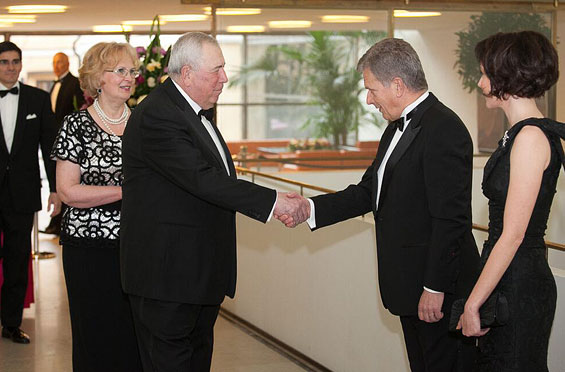 President Niinistö shakes hand with Dean of the Diplomatic Corps, Ambassador of Russia Alexander Rumyantsev. Copyright © Office of the President of the Republic