Home / President Niinistö to UN Ambassadors: Finland has much to offer to the international community

“Finland’s commitment to the United Nations and to the collective security is demonstrated by our candidacy for a non-permanent seat on the Security Council for the term 2013-2014”, President of the Republic Sauli Niinistö said on Thursday 31, May 2012. He arranged a welcoming reception for the UN Ambassadors of 28 countries at the Presidential Palace in Helsinki. The New York-based ambassadors are attending a three-day-seminar on challenges of the UN peace keeping operations, arranged by the Ministry for Foreign Affairs.

"We believe that we have much to offer to the international community. As a non-permanent member, we would bring the perspective of a small, capable and engaged member state to the deliberations of the Council”, President Niinistö said. “Finland is a strong supporter of the UN, in word and deed. For us, the United Nations is the cornerstone of the global multilateral system and cooperation. It is the highest authority in the system of global security.”

Finland joined the UN in 1955. Since then around 50 000 Finnish peacekeepers have participated in 30 UN or UN mandated operations.

"By participating in peace operations, Finland wants to create conditions for recovery and development. That is why Finland has put increased attention to civilian capacities in operations during the past few years”, the President said. “Force alone cannot create peace, but only the space in which peace can be built”, he cited the famous UN Brahimi report,  which was published in 2000.

According to President Niinistö, if Finland is elected, we would continue advancing the role of preventive diplomacy and mediation also in the work of the Security Council. “We would aim at enhancing women’s role in conflict prevention, resolution and peacebuilding, in the spirit of landmark resolution 1325 on Women, peace and security.” 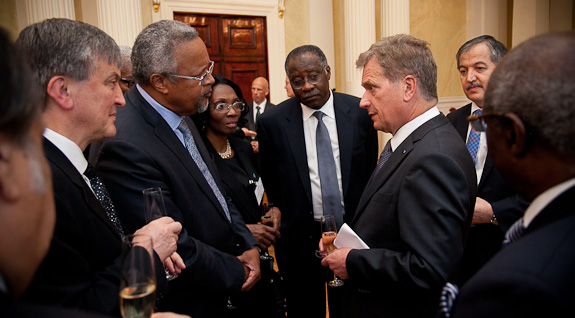 President Niinistö discusses with the UN Ambassadors. Copyright © Office of the President of the Republic of Finland