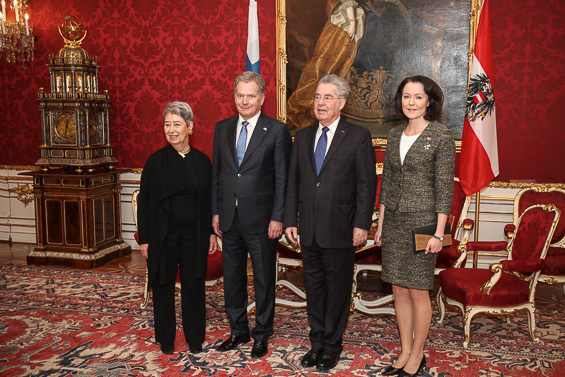 During their meeting, the presidents discussed the current situation with respect to asylum seekers in Europe, security policy, Russia and the Ukraine crisis. At the press conference for the visit, President Niinistö noted that, as small countries, Finland and Austria have a similar approach to trying to build a better world. “Today, there is a greater need than there has been for decades to build security and peace. We must try to bring stability to Europe and the world.”

Both President Niinistö and Federal President Fischer stressed that ending the Syrian War and stabilising the situation in North Africa are the primary goals. “People are in a very difficult situation over there. The more difficult the situation, the more migration there will be to Europe,” President Niinistö said.
Finland and Austria have both received large numbers of refugees. Federal President Fischer noted that Austria cannot take care of an unlimited number of refugees. “We are protecting people who are in genuine danger, whose families are at risk.” President Niinistö stated that so-called safe countries could be defined at European Union level, so that each member state does not have to define them separately.

A new kind of immigration

President Niinistö observed that we have seen a new kind of immigration via the eastern border. “Our border with Russia is as long as those of the other EU countries in total. We are currently negotiating with Russia on how we can keep the situation under control,” the President pointed out.

The Presidents also discussed the situation in Ukraine, “We both hope that the Minsk Agreement is concluded as soon as possible,” President Niinistö said.

On the evening of Thursday 4 February, the first evening of the visit, the presidential couples attended the Vienna Opera Ball together. Austrian Federal Chancellor Werner Faymann and other members of the Austrian Government, as well as political and social leaders, were also present.