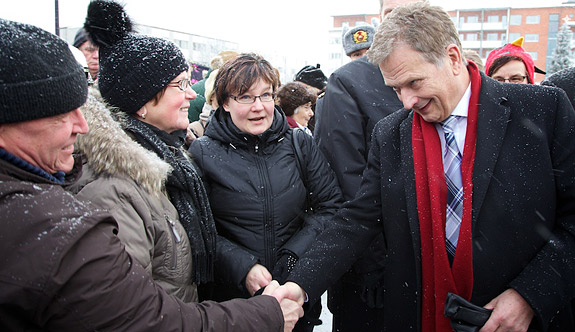 At midday, President Niinistö dropped by Lappeenranta’s market square to meet the townsfolk. Copyright © Office of the President of the Republic of Finland

The economy, border and neighbourly relations were the themes of President of the Republic Sauli Niinistö’s first domestic visit for 2013, to Lappeenranta and the eastern border, on Wednesday 16 January 2013.

In the morning, President Niinistö gave a public address at Lappeenranta University of Technology and met business representatives from the area. After dropping by the market square, the President continued to the Nuijamaa border crossing point, where he found out more about the eastern border and the activities of the Border Guard.

Huge growth in mobility is a key element in current relations between Finland and Russia, affirmed President Niinistö in his speech given in the university’s Viipuri Hall. ”Whereas, a couple of decades ago, a few tens of thousands of visas were granted in Russia, 1.3 million a year are already issued now. There is every indication that this increase will continue.”

”It is important to the whole of Finland that growing mobility is managed in such a way that we – Finland and Russia – fully benefit from it while, on the other hand, avoiding the related problems to the maximum possible extent.”

According to President Niinistö, visa exemption between the EU and Russia represents the most important single major project in our eastern relations, and thorough preparations must be made for this. ”While Finland supports visa exemption, it does not intend to rush the issue,” explained the President. He emphasised that Finland will not decide on visa exemption alone, but together with the rest of the EU.

A well-functioning border is a calling card

A well-functioning border is indispensable.”It also promotes security and represents a calling card for Finland on a much wider basis, including internationally. We cannot afford to let that card expire.”

According to President Niinistö, Finland and Russia’s relations do not hang on any single issue, but are multifaceted, stable and function smoothly. ”Contact at various levels and political dialogue are extremely close. Our economic relations are strengthening continuously. With EUR 10 billion in investments in Russia, Finland is a major player in the country. If it is true to say that Russians provide jobs in Finland, it just as true to claim that we do so over there.”

The public lecture was followed by a meeting with entrepreneurs, attended by around 180 representatives of the region’s companies. In particular, the themes of the ensuing discussion included the promotion of trade between Finland and Russia, visa exemption, tourism and infrastructure. ”I heard highly encouraging messages. This suggests that everything is under control here in South Karelia,” President Niinistö remarked.

At midday, President Niinistö dropped by Lappeenranta’s market square to meet the townsfolk. While visa exemption was also discussed in the snow-laden market square, the President’s choice of lunch was of special interest: Hydrogen or Atom? ”I think I’ll take the Hydrogen,” responded the President, opting for the local speciality of that name.

From Lappeenranta, President Niinistö continued on to the border crossing point at Nuijamaa, where he was briefed on operations at the eastern border and those of the Border Guard. Lieutenant General Jaakko Kaukanen, Chief of the Border Guard, and Colonel Tero Kaakinen, Commander of the South-east Finland Border Guard, briefed the President on issues such as border guard cooperation with Russia and efficiency measures.

The programme also included time spent at the border. At the old border crossing point at Nuijamaa, the President was shown how the land border is policed in practice. 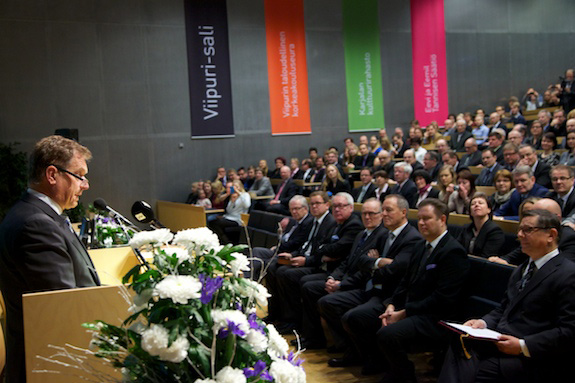 President Niinistö addressed a full house at Lappeenranta University of Technology. Copyright © Office of the President of the Republic of Finland 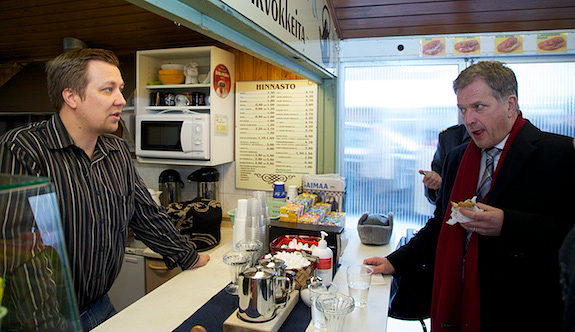 Hydrogen or an Atom for lunch? Copyright © Office of the President of the Republic of Finland 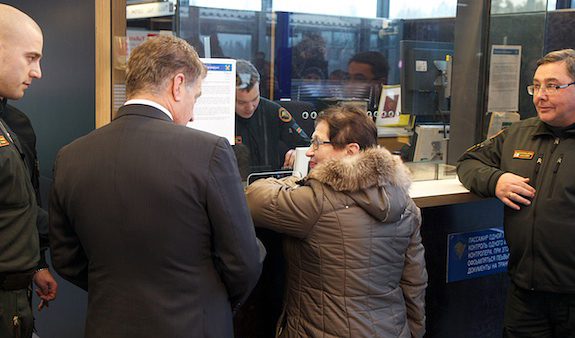 At the Nuijamaa border crossing point, President Niinistö exchanged greetings with a Russian lady at passport control. Lieutenant General Jaakko Kaukanen (on the right), Chief of the Border Guard, follows the conversation. Copyright © Office of the President of the Republic of Finland 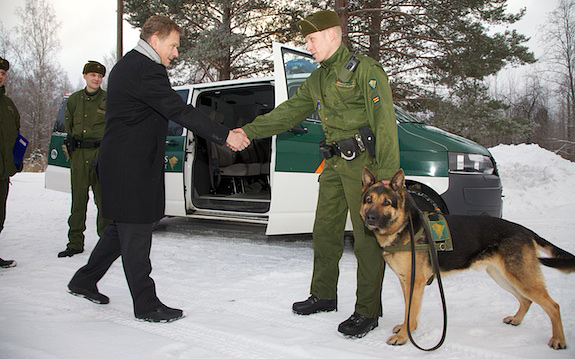 At the national border, the President was briefed on how the land crossing point is policed in practice. Copyright © Office of the President of the Republic of Finland