On their first official domestic tour, President of the Republic Sauli Niinistö and Mrs Jenni Haukio visited the towns of Salo and Forssa, which are facing severe structural changes, on Tuesday 20 March 2012. President Niinistö acknowledged in his speech at Salo Town Hall that there are multiple acute challenges. The two main messages conveyed during President Niinistö’s visit were: “No man left behind” and “The people of southwestern Finland are tenacious and will not give up”.

President Niinistö visited the Halikko Works steel product plant in Salo in the morning. He had himself had a summer job with the company as a sheet metal cutter and crane operator at the age of 17 – and the company still has the sheet metal machine he worked on.

At the Nokia plant in Salo, President Niinistö was introduced to the personnel adaptation programme prepared in tandem with the region’s Centre for Economic Development, Transport and the Environment.

After a discussion and a working lunch at Town Hall, President Niinistö and Mrs Haukio had coffee on Market Square in Salo and talked to local residents.

President Niinistö noted that the work done in the project is valuable but extremely taxing. “Social exclusion touches everyone. I intend to remind people that everyone can do something. Looking the other way is not an option,” he said in a speech at the youth club on the Forssa spinning mill site, where he also met local residents. 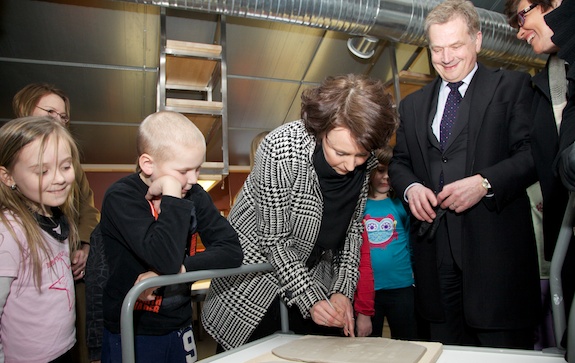 President Niinistö and Mrs Jenni Haukio wrote their names in clay at the visual arts school for children and adolescents in Forssa. Copyright © Office of the President of the Republic of Finland