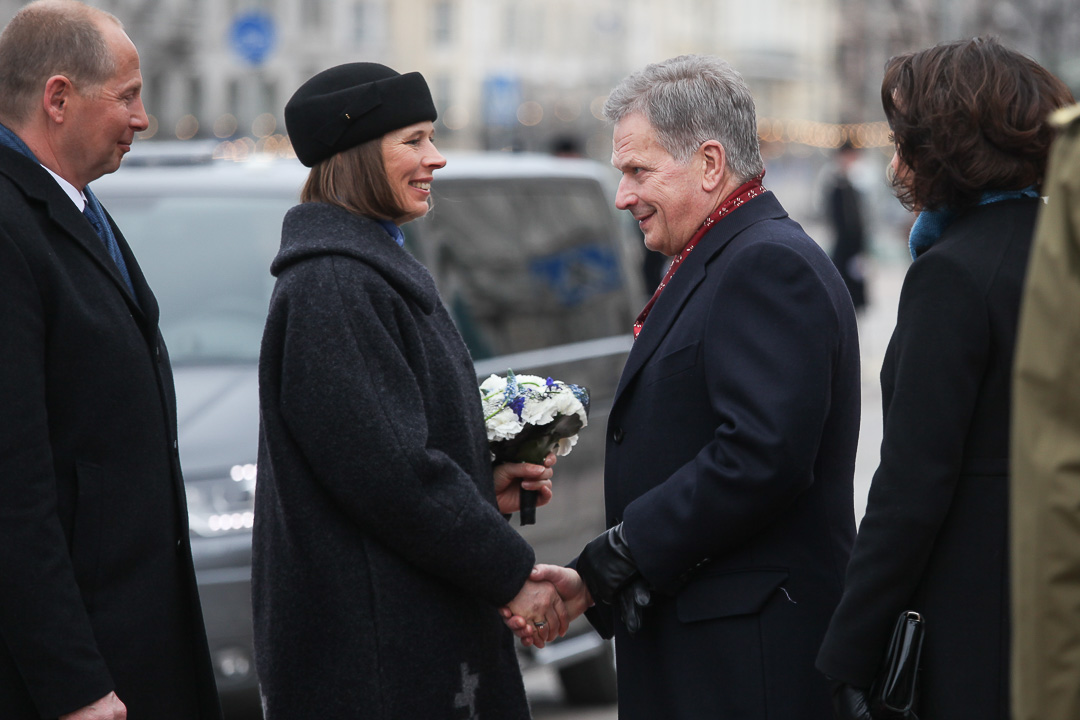 President Kaljulaid visited Finland for her first overseas trip as President on 20 October 2016. Photo: Juhani Kandell/Office of the President of the Republic of Finland

“Our countries have a beautiful relationship, we are like siblings. We have learned to cooperate in all areas. The most important thing is the capability to cooperate because then you are also capable of giving answers in the future, whatever it brings,”” said President of the Republic Sauli Niinistö at a press conference, after meeting with Kersti Kaljulaid, the President of Estonia, in Helsinki on 7 March 2017.

President of Estonia Kersti Kaljulaid is making a state visit to Finland together with her spouse, Georgi-Rene Maksimovski, on 7–8 March 2017. The presidents discussed subjects such as relations between Finland and Estonia, the security situation in Europe and the Baltic Sea region, topical EU issues and relations with the US.

At the press conference, President Kaljulaid stressed that, in times like these, like-minded countries should stick together and engage in constructive initiatives securing their common future. She said that cooperation between Finland and Estonia continued to intensify.

Both presidents agreed that the EU was an important community for Member States and should be developed. President Niinistö commented that now, when the EU is needed more than ever, it is weaker than ever.

“For both of us, it is of vital importance that the EU exists and is capable of giving answers in the future. I would say that the EU is more important to its small Member States than the large ones. We need to remind our people of all the good they have received from the EU,” President Niinistö emphasised.

“What kind of union is unable to guarantee the security of its citizens and their families? Finland has been advocating for more defence cooperation for years and we are satisfied to see it taking place now,” President Niinistö said.

Estonia will begin its first term of the EU presidency in July. President Kaljulaid affirmed that, during its presidency, Estonia will do everything it can to promote the development of the EU. She believes that cooperation is extremely important.

“Think of the continent’s major challenges: the security situation, terrorism, migration, the environment – none of these can be solved alone. We need to seek solutions together, for the common good,” said President Kaljulaid.

Air safety a basis for cooperation between NATO and Russia

The presidents also referred to the security situation in the Baltic Sea region. President Niinistö emphasised the importance of small steps forward, citing the International Civil Aviation Organization’s meeting on air safety, held in Helsinki in early March, as an example. Russia, the Baltic countries and NATO were represented at the meeting. The NATO-Russia Council paved the way for the meeting.

“NATO-Russia Council agreed in December to support this work. I think it is very remarkable that NATO and Russia have the same opinion on this. We have not seen that in years. This is a minor issue, but if we can promote air safety in the Baltic Sea region, it is hopefully a start of finding out something bigger to agree on,” President Niinistö said.

President Kaljulaid also stressed the importance of small steps and pointed out that air safety was a good example of this.

The presidents discussed relations between their countries and the new administration in the United States. Both President Niinistö and President Kaljulaid referred to the discussions held with representatives of the US administration at the Munich Security Conference. They said that the message had been reassuring and no major changes are in prospect.

“The Munich Conference was very important. I did not see it negatively, unlike some opinions we heard. There were elements of at least trying to understand each other. I am sure that we are both warmly supportive of this,” said President Niinistö.

State visit to continue in Tampere

On Tuesday 7 March, President Kaljulaid met with Maria Lohela, the Speaker of the Finnish Parliament, and Prime Minister Juha Sipilä. She participated in a seminar and panel discussion, held in Team Finland House, on business cooperation between Finland and Estonia.

Minister of Education and Research Mailis Reps and Minister of Entrepreneurship and Information Technology Urve Palo will accompany President Kaljulaid on her visit to Finland. She will also be accompanied by a business delegation of around 50 members.